Munster make 11 changes to their team for Benetton clash 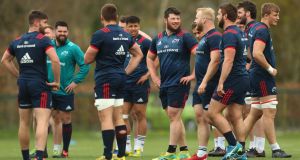 The Munster team training at UL in Limerick this week. Photograph: James Crombie/Inpho

Munster have made 11 changes to the side that defeated Cardiff Blues last week for Friday night’s Pro14 clash against Benetton Rugby at Stadio Monigo (kick-off 7pm Irish time).

Mike Haley, Darren Sweetnam, Billy Holland and Chris Cloete are retained from last week’s line-up with Holland captaining the side.

Three academy players are included in the squad as Shane Daly and Gavin Coombes are named in the starting XV with Alex McHenry in line to make his senior debut off the bench.

Haley starts at fullback with Sweetnam and Daly on either flank as Dan Goggin and Sammy Arnold partner up in the centres. Alby Mathewson and Hanrahan are named in the halfbacks.

Jeremy Loughman, Rhys Marshall and Archer start in the frontrow with Fineen Wycherley and Holland in the engine room. Jack O’Donoghue, Chris Cloete and Coombes complete the starting XV.

Dave O’Callaghan is among the replacements and set to make his first Pro14 appearance since September after recently returning from injury.