What we learned: Stander relishing new role with Ireland as Furlong thrives 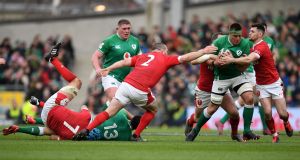 CJ Stander carries during his man of the match performance against Wales. Photograph: Daniel Leal-Olivas/Getty/AFP

Ireland thoroughly deserved their four try, bonus point 24-14 victory over the World Cup semi-finalists and defending Grand Slam champions, Wales. The margin slightly flattered the visitors but it’s a minor cavil when weighed against back-to-back wins for Andy Farrell’s side.

The evolution of the playing patterns under the new head coach was more visible against Wales, than it had been in the win over Scotland; it was a little more embedded too in terms of fluency to Ireland’s attacking patterns.

Change of role for CJ Stander

The Munster and Ireland forward won a second successive man-of-the-match award for another outstanding performance. Having moved into number eight from blindside flanker following the departure of Caelan Doris (concussion) after four minutes of the Scotland game, he was back in the centre of the backrow for the Welsh game.

It was striking to note the subtle differences in the way that Andy Farrell wants him to fulfil that role. Stander’s selfless work-rate has never been questioned but there were other facets in his game that were, namely footwork in contact and passing. Against Wales he passed eight times in developing that aspect of his game.

He was also freed from some of the heavy duty carrying and tackling that were previously a hallmark of his game to go after the ball at the breakdown, something that he did brilliantly once again, having been hugely effective in this facet of the game against the Scots. Irrespective of where he plays against England, Stander deserves credit for the manner in which he has embraced a slightly different remit.

It’s interesting that Peter O’Mahony (12) and Josh van der Flier (12) were seen more often hunting down ball carriers with Stander (seven) generally timing his arrival to go after the poach.

Ireland’s tighthead prop is recapturing his best form, the try encapsulating a return the qualities that mark him as one of the world’s best in his position. He benefitted from the slingshot effect of Rob Herring and Peter O’Mahony propelling him over the line but the power and aggression in Furlong’s carrying and tackling is a huge fillip for his team.

His work-rate has been impressive too, last week having to survive all but a few minutes of the game and backing that up with another lung bursting effort this week. He appears more animated on the pitch and the sight of him bullocking his way through red shirted bodies was undoubtedly a galvanising factor for his teammates. He is a very effective ball carrier, and his fourth try since the beginning of 2019 is more than any other prop in Test rugby.

In sport you need a little bit of good fortune

For the second week, Ireland profited from an opposition player dropping the ball over the line. Following on from Scottish fullback Stuart Hogg’s faux pas, Wales centre Hadleigh Parkes lost control as he crashed between a couple of Irish tacklers and over the try line. Would it have made a material impact on the outcome of the game? Probably not but at some point down the line, Ireland will no longer get that rub of the green.

There were also valuable lessons to be learnt from that moment in that two or three Irish players were caught looking at the ruck and turned in a little bit rather than scanning for the next carrier. That short line back against the grain that Parkes cut is his stock and trade and should have been picked up a little quicker by the defensive line.

Indiscipline and the breakdown

While Ireland head coach Andy Farrell might not have balked at the number of penalties Ireland conceded (10) he won’t be pleased at the nature of several, which would be considered of the soft variety. Some of the officiating was erratic but Ireland collectively need to be a bit more self aware, something that would also apply to their work periodically at the breakdown.

To assist with Ireland’s desire to pursue a more expansive approach, the ball presentation at rucks and speed of the recycling needs to be more polished to allow Conor Murray to clear the ball a little quicker; the knock-on effect is that it will make it more difficult for the opposition to reset defensively.

Ireland’s pods or individual ball carriers need to run onto the ball more often, use their footwork and mix up the angles and be more dynamic. A standing start often enables the opposition to pick the contact point. It is all a little predictable and for the attacking patterns to get more room to breathe it has to change particularly against better organised defences.

Game Changers: The Irish brother who became the Godfather of Kenyan running 06:16
Contrasting sanctions for James Cronin and Robert Powell difficult to reconcile 06:00
GAA yet to receive any complaints from clubs about county teams’ activity 06:28
Greenwood and Pogba supply finesse as Man United deepen Villa’s woes 22:49
Masters plan for November shows Augusta National is out of touch 22:30
Crossword Get access to over 6,000 interactive crosswords