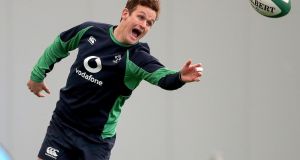 Billy Burns: outhalf will be in the starting Ulster side at the Liberty Stadium. Photograph: Bryan Keane/Inpho

It’s difficult to see this straying away from being another win for the side visiting Liberty Stadium what with Ulster being in pretty robust shape and the horribly struggling Ospreys simply not having any form at all.

And though Storm Dennis could prove quite a leveller, the strength of Ulster coach Dan McFarland’s selection would certainly suggest that the northern province should make it a ninth victory from their last 11 matches.

While McFarland and co were adamantly averse to even hinting that the crisis-hit Welsh region, with one win all season, are a mere carcass waiting to be picked over, there was no doubting the province’s desire to get through this first game in the Pro14’s three-game segment, during the Six Nations window, to keep Ulster on track in Conference A’s second spot.

After all, this time last season, Ulster just about escaped Bridgend’s weather-hit Brewery Field with an 8-0 win from an arm-wrestle of an encounter with the then Allen Clarke-coached Ospreys. But, 12 months on, the outlook for both sides is now markedly different.

Ulster, who saw off today’s opponents 38-14 in Belfast to take a bonus point on the Pro14’s opening day, have Ireland squad members Stuart McCloskey and Billy Burns in the starting side while props Jack McGrath – Eric O’Sullivan getting the start at loosehead – and Tom O’Toole are waiting to be deployed from the bench.

As expected Marty Moore is back at tighthead after injury while Louis Ludik also returns and takes the left wing slot with the dangerous Robert Baloucoune over on the right and Matt Faddes at fullback.

Dave Shanahan deputises for John Cooney who is with Ireland as does Adam McBurney for Rob Herring, Kieran Treadwell for Iain Henderson and Ludik for Jacob Stockdale. Will Addison was retained by Andy Farrell but returned to Belfast early due to a calf issue.

Jordi Murphy is interestingly benched allowing Sean Reidy, who has signed a two-year contract extension, to start at openside flanker and Mattie Rea take the number six jersey. Marcell Coetzee is at eight.

1 England v Ireland preview: Ireland’s revival to face its sternest test
2 Irish pack must expose the weakness in England’s backrow
3 Keeping Donegal on the road to success a costly business
4 Matt Williams: Ireland will need to step up on Wales display to prevail at Twickers
5 Ireland Slam England at the Gardens to open up Grand ambitions
Real news has value SUBSCRIBE