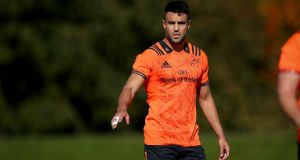 On TV: Live on Sky Sports

The return of Munster’s three test Lions could hardly be more timely. Conor Murray, Peter O’Mahony and CJ Stander are parachuted straight into the starting line-up against Cardiff Blues, in advance of next Saturday’s trip to the Aviva to face Leinster and then the opening European Champions Cup jousts away to Castres and at home to Racing. But just as pertinently, it comes in the wake of last week’s beating in Glasgow.

Given Munster’s three opening wins over Benetton, the Cheetahs and the Ospreys, perhaps not too much can be read into one defeat. The loss itself wasn’t surprising. If Glasgow weren’t going to avenge last season’s four defeats to Munster by beating them at home last weekend, they never would. Nonetheless, Munster slipped off tackles and struggled when Glasgow upped the tempo on their artificial pitch.

Expectations on Saturday will be heightened by the sprinkling of stardust which the Lions provide, while Dave Kilcoyne, Niall Scannell and John Ryan all make their first starts of the season, as does Robin Copeland in the second row. Ian Keatley comes in at half-back and Jaco Taute returns in midfield.

Keith Earls’s delayed start to the season, due to a groin problem, continues and with Simon Zebo also absent, having not trained fully during the week, the back three of Alex Wootton, Darren Sweetnam and Andrew Conway remains in situ for the fifth game.

JJ Hanrahan is also in line for his first Munster appearance since the 2015 Pro12 final, following his two-year sojourn in Northampton, off the bench. Shannon lock Sean McCarthy is included in his first match-day squad this season, while new arrival from Saracens, Mark Flanagan, could make his debut off the bench.

After a troubled start on and off the pitch, Cardiff arrive buoyed by last week’s first win courtesy of Willis Halaholo’s second try.

Like Erasmus, Danny Wilson has announced his forthcoming departure, albeit at the end of the season. He makes eight changes in what looks like a more untried selection. There’s a competitive debut for centre Jack Roberts, who joined from Leicester in the summer, and a first start for flanker Olly Robinson, the son of former England, Scotland and Lions coach Andy Robinson, who joined on loan from Bristol and impressed with his tackle count last week.

There are also first starts of the season for fit-again winger and captain Blaine Scully, half-backs Tomos Williams and Jarrod Evans, and locks James Down and George Earle.

Bearing all that in mind, Munster’s need for a win should be realised.