Unbeaten province have 10 international players returning for clash against Zebre 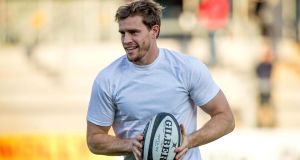 Andrew Trimble during training ahead of Ulster’s clash with Zebre. Player will captain the province for his record-matching 221st appearance. Photograph: Morgan Treacy/Inpho

Michael Bradley is largely sticking with the Zebre side that carved out a win in Port Elizabeth against the Southern Kings last week. The former Irish scrumhalf makes just one change with tighthead prop Dario Chistolini returning to the frontrow as unbeaten Ulster ramp up their international wattage for the trip to Stadio Lanfranchi.

It is the time of year where director of rugby Les Kiss has to blend his front-line internationals into the playing side with one eye on the November international series and another on the upcoming Pro 14 derby game (against Connacht) and the beginning of the European pool matches.

Ulster’s opening European pool matches are at home to Wasps and away to French side La Rochelle.

In that light, the province have 10 internationals for Saturday’s game, although not their powerful South African backrow Marcell Coetzee or the still injured Rory Best, whose hamstring tear will force him to miss both European games.

Andrew Trimble captains the side, who will expect to make it five wins from five.

The 32-year-old, who will equal Roger Wilson’s record of 221 appearances for Ulster, starts on the right wing, with Louis Ludik and fullback Charles Piutau completing the back three.

South African Jean Deysel also returns to the fray having recovered from an eye injury.