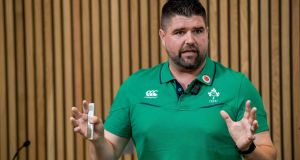 Nick Winkelman, the IRFU’s head of athletic performance and science: “Everyone has a ceiling in terms of what their capabilities are.” Photograph: Morgan Treacy/Inpho

It may seem like a stretch. But in terms of the tools that make an athlete or soldier, it is not such a long way from Kabul to Kingspan Stadium of Aviva.

Rugby, the NFL or the US military, says Nick Winkelman, the IRFU’s head of athletic performance and science, is about people and systems.

“What we do, why we do it, how we do it,” adds the American, who gave up working in the United States with professional athletes, the army and fire fighters 18 months ago, to oversee Irish rugby.

“I work at two levels. The second is around people from a leadership perspective,” he says.

Bodies and minds. This week in Aviva, Winkelman produced the latest piece of rugby gadgetry that measured hamstring strength. It was to rectify a perceived issue with Irish players and their hamstrings and it measured asymmetry, if one was stronger than the other, if one appeared weak after a heavy workload, all geared towards reducing the risk of muscle failure.

His job originally with the private US company EXOS was to fill a market space in the professional sport’s calendar. EXOS worked with NFL, NBA and hockey athletes in the off season. It was a place they could go to get the same level of care as they did in a professional system.

“EXOS opened its first facility in 1998 in Phoenix Arizona,” says Winkelman. “It started to service the professional athletes where they could go on their off season to get the same quality of care across conditioning, physio, medical, nutrition etc. My former boss built a team like a pro team but in a private setting.

“They added corporate wellness, coach education, elite consultancy to the military centre and fire fighter sector and police sector. They became one of the pre-eminent authorities in human performance in the private sector and people wanted that training system deployed into their environment.

“Probably their biggest business now is in corporate wellness. There are EXOS facilities in Dublin in the Google Centre.”

Like the hamstring machine, every application is designed to improve the Irish system, sometimes by fractions. Rob Kearney may pull a wry smile. His hamstring tear shows nothing can prevent injury. But the careful attention of science can reduce the odds of it happening.

Backline players like Joe Carbery and Garry Ringrose can glide, sell most players a dummy. But how do they become bigger and stronger without losing their lightness and balanced speed? How do they gain bulk and mass and also become better at moving?

“Indirectly yes, I would work across how our players develop. At the end of the day the two players you mention, that is going to come from the team in Leinster,” says Winkelman.

“My hope would be that working with the coaching there we would identify where we want to continue to improve, at a player level or systematically.

“Most of my work would not be at player one on one, rather looking at it generally, where we need to get better. If we felt we had a category of players that were really physically talented, really good moving skills but lacked the size and strength, well yeah, that might be a conversation we would have. But by no means has this been a dominant theme.

“What we tend to find is that lighter and faster players, they are good at owning and taking space, they either take contact under their own terms or they take contact with momentum and the direction of the contact, which means they are not getting a direct hit and often times, and you see it in the NFL as well, they can survive.”

Winkelman talks of ownership of space on the attacking side of the ball. He talks of players who can see how a play is developing, who see where the space currently is, or see where the space will be and if there is none manufacture it with foot work and with that “sit a defender down”.

Yes, he says, those things can be taught, although every player has limitations. His job is to get the players to reach their own upper boundaries. Devin Toner will never have the lateral movement of Carbery, Ringwood or Simon Zebo. But in lineouts, breakdowns or ball retention his ceiling will be higher.

“With those kinds of individuals [Ringrose, Zebo, Carbery] you see this emerging decision,” says Winkelman before explaining there is a second requisite.

That requisite is to find the speed to exploit the space they have just created. In short spaces, says Winkelman, players have quickness. If they can then turn that quickness over to attacking the space and into speed over 20, 30, 40 metres then they have something potent: quickness and speed.

“There’s the ceiling around their decision making and round their physical ability,” he says. “I believe both are trainable in so far as if you are not at your ceiling we can get you close to that. I know that’s a generic answer but it’s a truthful answer.

“Everyone has a ceiling in terms of what their capabilities are. If you currently have a certain level of decision making and physicality just by playing the sport and you’d never done focused speed, agility and decision-based agility work, then adding that to your programme will give you an increase.

“In some cases it will be big and some cases marginal but none the less an increase. I’ve seen that with the work I did at EXOS with American football players.”

But does it work? Can Ireland say they are a better team because of it? Are the players physically and mentally more effective, less likely to break down than they were two years ago.

“From where I sit that would be difficult to answer right now,” he says. “I have been very happy to see the way we are training our players in the weight’s room and on the field.”

As ever with Irish rugby, standing still is rarely an option.

1 Keith Duggan: Bubba Wallace tweet shows just how troubled Donald Trump’s mind is
2 Mark Lawrenson: Searing honesty and a sense of being in control defined Jack Charlton
3 Malachy Clerkin: Sleep well Jack, you made us all happy
4 Ken Early: Another Mourinho masterclass in going through the motions
5 Peter Byrne: A gruff exterior hid the sensitive soul and warmth of Jack Charlton
Real news has value SUBSCRIBE