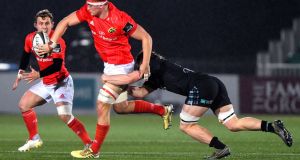 There was much to admire in the manner in which Munster eked out a sixth successive Guinness Pro14 victory to maintain their unbeaten start to the season. The undercurrent of niggle which flared periodically added a piquancy to the exchanges, a contest played in driving rain and a swirling wind.

Munster stood firm, several of their younger players conspicuously so, especially the outstanding Craig Casey and Gavin Coombes. The driving maul and scrum dominance underpinned their victory and Glasgow were left to rue deteriorating discipline that cost them dearly.

It should not detract from Munster’s win and especially the work of their pack who revelled in the attritional nature of the exchanges. Casey’s intelligence and game management was first class and pivotal, supplemented by Ben Healy’s work at outhalf.

Munster settled quickly, Casey put up a couple of nicely judged box-kicks, Fineen Wycherley won a good turnover and edged the early kicking duels, a sensible gambit given the conditions. The fact that the visitors managed to pilfer two of Glasgow’s first three lineouts facilitated their early territorial dominance.

Billy Holland’s decision to get Ben Healy to kick successive penalties to the corner, rather than at goal was vindicated when the Munster captain forced his way over after breaking off from a lineout maul. Healy kicked a magnificent conversion from the touchline into the teeth of the wind.

Glasgow responded with a beautifully crafted try, Tommy Seymour appeared off his wing and breached the Munster midfield; despite his pass not going to hand, Robbie Nairn scooped it up and beat a couple of tacklers before popping the ball to fullback Glenn Bryce, who fell over the line.

Replacement Brandon Thomson thumped over a penalty from the halfway line; Healy had put the re-start into touch following the Glasgow try and Stephen Archer was penalised at the ensuing scrum.

Munster number eight Coombes crucially pinched a couple of balls at the breakdown as the home side temporarily dominated but without any return on the scoreboard and the Irish province regained the advantage on 31 minutes, initially winning a scrum penalty which Healy put into the corner.

The outcome was almost a carbon copy of their first try, this time it was Holland who took the lineout and Fineen Wycherley a tail-gunner in the maul that powered over the line; Healy hit a post with the conversion as Munster forged a 12-8 lead.

They could have stretched the advantage but lost a lineout throw in the Glasgow 22 and it took another superb piece of work from Coombes down the other end of the pitch to force a penalty turnover.

Healy missed a couple of penalties, one at goal another to touch, before landing a 40-metre effort following a scrum penalty on 47-minutes.

The outstanding Casey thwarted a Glasgow scrum eight metres from the Munster line but the visitors then conceded three penalties and from the third Holland paid the price for cumulative offences and received a yellow card on 61-minutes.

A fourth transgression soon after and this time no respite for the visitors, Glasgow hooker Grant Stewart driven over from a lineout maul to narrow Munster’s lead to 15-13 going into the final quarter.

Glasgow captain Ryan Wilson was correctly sent to the sin bin for a cheap shot on Casey and Munster extracted the maximum retribution when Coombes muscled over for a try from close range, his sixth try of the season.

Jean Kleyn’s 77th minute try ensured the bonus point and a fitting embellishment to an impressive performance from the visitors.