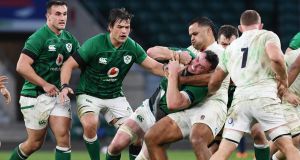 So much effort, so much huffing and puffing, without ever looking like penetrating England’s white wall, never mind blowing their house down. The nagging suspicion also remained that England kept Ireland comfortably at arm’s length while not required to go up the gears.

The 17-phase attack nearing the half-hour mark summed up Ireland’s bluntness but also, perhaps, hints of the way to go. In a dog-eared script, for the most part the repeated one-off runners were lined up and smashed, and the only times Ireland worked their way over the gain line was when going wide to Peter O’Mahony (twice) and James Lowe and then right, via Keith Earls’ long skip pass to Bundee Aki.

Jamison Gibson-Park’s blindside footwork and offload to Earls (a welcome variation in tactics) took out both English centres. Earls then stepped Elliot Daly only to be denied a try by Jonny May’s covering tackle as the presence of Ben Youngs blocked his passing lane to Chris Farrell.

Alas, having Hugo Keenan truck up the recycle was the wrong option as, shortly afterwards, was Gibson-Park looking to carry off the base after Bundee Aki had punched line-out ball well over the gain line.

Ultimately, Ireland lacked variety, be it more pick-and-go drives, more use of the blindside, tip-on passes, inside passes reaching the edges more, but England’s defence was brilliant. They had made 90 tackles before they missed one.

Their unrelenting line speed, tackle execution and selective competitiveness at the breakdown could have provided a template in what, at times, felt like a prolonged defensive training session.

They made 238 tackles while missing only nine, the backrow and Maro Itoje leading the way with 90 tackles between them and none missed.

For the fourth meeting in a row, England had the better of the collisions, albeit not quite as pronounced as in the last three clashes, as they made seven dominant tackles to one.

Unusually, although perhaps a reflection of the latest tweaks to the game’s laws which favour the jackal specialists, England only conceded 13 penalties to 12. Once again Pascal Gaüzère did Ireland few favours, most obviously so when Jamie George halted Rob Herring off a line-out maul with a tackle around the neck or when Itoje followed through on a tackle by falling over the ball.

But it didn’t help that the quality of Ireland’s passing was too high or at the inside shoulder, and that the line-out again seriously malfunctioned.

Ireland’s option of choice for several years has been to go to the corner. It was a reliable and often potent source of tries in the all-conquering 2018 but not alone is the catch-and-drive not yielding anything like the same return, but in the post-Devin Toner/Rory Best era, even the catch part has rarely become so unreliable.

That one of Ronan Kelleher’s overthrows led to an 80-minute breakaway try by May compounded these woes. The early wobbles made it more curious that Ireland went to the corner again from an eminently kickable position.

So much of one’s perspective on this game is coloured by one’s expectations going into it. If you saw this as the mock exams for the Leaving Cert, then for sure Ireland came up short overall and have plenty of room for improvement.

But they remained competitive and the Jacob Stockdale try felt like more than just a consolation. To have drawn a blank against England for only the second time in 43 years would have given Itoje and his chums even more to holler about and left Ireland feeling somewhat demoralised.

Hugo Keenan played well overall at fullback, covering plenty of ground, reading the game well and taking some fine catches, even if he slightly misread Owen Farrell’s cross-kick and mistimed his jump. However, Ireland’s narrow defence off England’s close-in drives led to James Lowe being sucked in and Keenan in a one-on-one with May, who is exceptionally good in the air as well as on the ground.

Even so, Stockdale – while not having any defending to do – provided more of a threat going forward and was quick out of the traps in catching Billy Burns’ typically well-weighted chip on the full to then beat Dan Robson for his try. The other lesson, if you can’t through them go around them, behind them or over them.

Save for the Earls’ chance, the closest Ireland came to converting the mountain of carries and recycles into tries was when Farrell was held up over the line by Henry Slade after a lovely grubber by Ross Byrne.

Too many of Ireland’s carries were not only straight but from behind the gain line and after some effective grubbers in the opening exchanges Ireland seemed to largely abandon that ploy. Nor did we see one of Byrne’s normally pinpoint cross kicks.

Still, winning that second half 7-6 did constitute a mini-victory, along with more like breaks (6-3) and offloads (5-1), and the Irish players and head coach clearly came away from this game less defeatist than previously.

There were also big performances from Andrew Porter, James Ryan, O’Mahony, Caelan Doris and Keith Earls, while proactive use of the bench resulted in Rob Herring and Iain Henderson bringing some measure of control to the line-out, Conor Murray added some calmness at scrumhalf (bringing Chris Farrell into the game more with long skip passes) and Burns and Stockdale brought some invention.

Of course, no team is ever at full strength but throw Tadhg Furlong, Dan Leavy, Johnny Sexton and Garry Ringrose into the mix, and even, praise be, a few supporters at the Aviva Stadium for the finale to the 2021 Six Nations on March 20th, and Ireland would have a chance.