England’s ferocious defence sets them apart from the rest 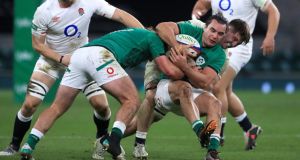 Seventeen years have now elapsed since England won their first – and so far only – Rugby World Cup on an unforgettable night in Sydney. All the social media flashbacks remind us of the “white orcs on steroids” who, universally popular or not, were definitely ahead of the game in their era. Every subsequent English team, unfairly or not, is fated to be measured up against them.

Perhaps it is no coincidence that Eddie Jones was the beaten Australia coach back in 2003 and that England’s current defence coach, John Mitchell, was in charge of the All Blacks side who were knocked over in the semi-finals. Nothing motivates more surely than narrow failure and, for all Jones’s input as a consultant with South Africa in 2007, it is impossible not to sense the desire currently sizzling away in England’s dressing-room.

Certain things cannot be faked in international rugby and 246 tackles in 80 minutes – with just nine missed – is a sure sign that England’s defence, Mitchell’s specific area of responsibility, is fast becoming the real deal. With ball in hand there are still issues to be addressed – more of which later – but without it England currently have few peers.

Crucially, too, they sound happy in their work, like a gang of Canadian lumberjacks drawing fresh energy from the tall timber falling all around them. “It was just infectious when you see boys putting in such big hits,” confirmed Kyle Sinckler, part of an England pack visibly determined to put last autumn’s World Cup final defeat to South Africa behind them. “You’re looking at Billy, Mako, the kamikaze boys, Maro everyone just flying in wanting to get a piece of the action. We didn’t wait for Billy to make a big carry or Maro to get a big turnover of tackle or Underhill or Curry to get a turnover. It was literally from the minute go, we just wanted it. You saw everyone from 1-23 really putting their body on the line.

As one-third of an England starting back-row that made 74 tackles between them – more than Ireland’s tally for the entire game – Sam Underhill is also well placed to quantify just how collectively valuable such defensive inspiration can be. “I think it is as important as the attack if not more important. If you can weather the most a team has to throw at you and if you can get the ball back it is as good a result as scoring. I think we are increasingly seeing the importance of aggressive defences, not just hitting people for the sake of hitting people but putting pressure on teams.

What will please Jones even more is that his players appear increasingly determined to take responsibility for driving their own high standards, rather than him or Mitchell simply cracking the same old whip. As the head coach emphasised: “Most of our defence meetings are led by players. They own it and you can see how much enjoyment they get out of it. John has done a great job.”

It was simply too much for Ireland, who did not trouble the scoreboard operator at all until six minutes from the end of their fourth successive defeat to England in the space of 22 months. If it did not help that the injured Johnny Sexton was reduced to the role of pitchside water boy, they still had more than two thirds of possession and territory and created frustratingly little. All is not entirely lost but they badly need Tadhg Furlong, Joey Carbery, Dan Leavy and Jordan Larmour back to lend some fresh momentum and encourage them to play something other than straight line, brick wall-bashing rugby.

They are not alone, in fairness, in a hemmed-in sport which is becoming so narrow and attritional in winter that even the TMO may soon have to undertake weekly concussion tests. Thank heavens, then, for the maverick tendencies of Jonny May whose second try – which elevated him into joint second place on England’s all-time try-scoring charts – was a splendid antidote to the prevailing whack-a-mole activity around him.

Nothing will ever quite match his searing first Test try against the All Blacks at Twickenham in 2014 but this one came mighty close: a jinking break from his own 22 and a high-speed chase to the other end – Mayday! Mayday! – that lacked only some flashing blue emergency lights.

The Gloucester wing’s strike-rate of 31 tries in 59 internationals looks even better when you consider he registered none in his first seven games for England. Finding ways to give the modern Jonny more opportunities would seem the logical next step; if Jones’s squad really do want to eclipse the deeds of the boys of 2003 they will need to do more than simply deal in claustrophobia and prevention. “The pleasing thing is we know we’re not even scratching the surface,” acknowledged Sinckler. “We’ve so much left in the tank.”

Wales away in Llanelli this Saturday may or may not be the place to launch a more ambitious gameplan but defensive zeal, no matter how insanely intense, will take them only so far. - Guardian