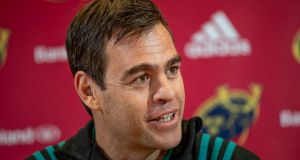 Nine of the 11 Munster players named in the Ireland squad for the November Test series are in the matchday 23 – Joey Carbery and Tadhg Beirne have been rested – as the home side try look to close the gap on their opponents, Conference A leaders, Glasgow Warriors.

Munster’s head coach Johann van Graan has selected a strong team despite seven changes to the side that beat Gloucester in the Champions Cup last weekend. Sam Arnold replaces the injured Dan Goggin, Keith Earls is back having rehabilitated a hamstring problem and there is a new halfback pairing in JJ Hanrahan and Alby Mathewson.

Up front hooker Niall Scannell has recovered from an ankle issue and takes over from the injured Rhys Marshall (quad) while Billy Holland and Chris Cloete replace Beirne and Tommy O’Donnell (ankle).

Former Ireland Under-20 international Fineen Wycherley, Neil Cronin and Ian Keatley are named on the bench.

Glasgow, who have won five of their six Guinness Pro14 matches to date and have already opened a seven-point gap at the top of the table, include five of their 16 players in the Scotland squad in the starting team, brothers, Peter and George Horne, centre Sam Johnson, secondrow Rob Harley and number eight Matt Fagerson.

While it seems ludicrous to suggest that this is a ‘must win’ game for Munster in just the seventh game of the league, they trail the Scottish side by 10 points in the table with a modest record of three wins from six matches.

The Irish province is a closer approximation to a full-strength side and that, coupled with home advantage, makes them 14-point favourites with the bookmakers. The result might not quite be that conclusive but Munster should be good enough to guarantee a victory.