Rassie Erasmus believes England game is ‘going to be spicy’ 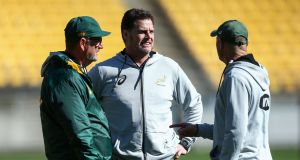 South Africa coach Rassie Erasmus is unsure what to expect from England as he prepares to field a relatively inexperienced side in the opening Test of the Springboks’ November internationals at Twickenham next Saturday.

The match falls outside of the international window, which means European clubs are not obliged to release their South African players, leaving Erasmus with markedly fewer options.

But he sees it as an opportunity to test his less experienced players ahead of next year’s Rugby World Cup in Japan and admits he is unsure how England will perform as they have not played a Test since losing their away series in South Africa 2-1 in June.

“They [England] will have to settle quickly, they haven’t played a Test match since they played us. I know they have been in camp for two weeks but it is difficult to change a lot when you don’t play matches,” Erasmus told reporters on Friday.

“It will be interesting to see if they get it right, what they want to change, and whether they change that much in such a short space of time.”

England’s technical team has been bolstered by the acquisition of New Zealander John Mitchell as defence coach.

He was poached from his position as head coach of Super Rugby side the Bulls and had worked mostly in South Africa since 2010.

His knowledge of the South Africa players, added to that of head coach Eddie Jones, will be a factor too according to Erasmus.

“Eddie is clever, Mitch [John Mitchell] is clever . . . we have got some things we think they are going to throw at us, to be tactically different,” Erasmus said.

“They will defend differently with Mitch and they will know more about us. It’s going to be spicy and interesting and we are going to play with a few young chaps in front of a big crowd, so it’s going to be a big challenge for them.”

Erasmus says he has also to tread carefully with the selection of his overseas-based players for the rest of the tour, which includes fixtures against France on November 10th, and Scotland and Wales on consecutive weekends after that.

“There is a human factor to it, families involved, futures involved, you don’t want to ruin things just because you are being stubborn and enforcing the regulations.

“The relationships we have with the club are, not so much give and take, but it is about being fair. But there are a few players that we will definitely use in those in-window Tests, without a doubt.”

Erasmus will announce his tour squad late on Saturday.

1 ‘This is sick’ - seventh-tier Swedish club cancels friendly after betting mayhem
2 Gerry Thornley: Changes to tackle laws could transform rugby by time of next World Cup
3 Sky Sports customers set to save on bills until Premier League returns
4 Jack Grealish needs to show that his remorse is real this time
5 ‘For 25 minutes I ran out of oxygen’: Pepe Reina on his coronavirus battle
Real news has value SUBSCRIBE

‘For 25 minutes I ran out of oxygen’: Pepe Reina on his coronavirus battle 20:06
World Rugby aiming to outline range of options by end of April 19:03
Impact of Covid-19 fails to derail pragmatic Stenson 18:38
Games postponement signals growing power shift from IOC to athletes 17:52
Tough for game to resume this year admits Tennis Australia chief 17:38
Here is your handy guide to sport on television this week