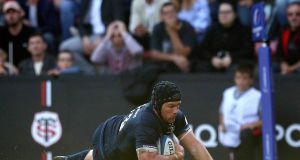 Sean O’Brien: will captain the Leinster side against Treviso in Italy. Photograph: James Crombie/Inpho

It’s a little over six months ago that the Italian side shocked last season’s double champions at the RDS, winning in Dublin for the first time ever in the league. Leinster player interviews this week confirmed that the defeat has been neither forgotten nor forgiven.

The desire to atone is reflected in the strength of the team dispatched to Italy and the presence of frontline Irish internationals Rob Kearney, Robbie Henshaw, Jack McGrath, Tadhg Furlong, James Ryan, Dan Leavy and Sean O’Brien.

As O’Brien, who will captain Leinster, admitted: “Everyone wants to go to Benetton this weekend after what happened last season.”

There are 12 Leinster players who lined out in the RDS last April on duty this weekend, while coincidentally the same referee, Ben Whitehouse, will again be in charge.

Kearney (quad strain) and Leavy (calf) return following injury while the only survivors from the starting team that went down to Toulouse in the Champions Cup last weekend are Henshaw, Joe Tomane, Furlong and James Ryan.

Adam Byrne plays just his second game of the season, Rory O’Loughlin is named in his preferred position of outside centre, Jamison Gibson-Park and Scott Fardy return to the starting line-up, so too Max Deegan, while the Byrne brothers, Bryan and Ed, Ross Molony, Irish U-20 scrumhalf Hugh O’Sullivan and Conor O’Brien will be keen for some game-time off the bench.

Matches of this ilk represent an opportunity to jockey for position on the depth chart in Leo Cullen’s squad.

Benetton had a number of players training with the Italian squad and that looks like it’s reflected in a strong bench with several less experienced players in the run-on team.

Properly attuned and focused, it is difficult to foresee anything other than a Leinster victory, particularly given the power and athleticism up front that should provide Ross Byrne and Gibson-Park with the platform to manage the game.