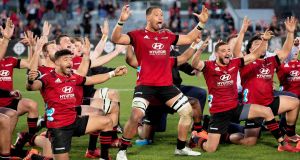 Thirteen minutes into last Saturday’s New Zealand Super Rugby Aotearoa match in Christchurch, the Crusaders trailed the Highlanders by 7-0 and had done little in the game at that point.

Off a lineout move on halfway, Richie Mo’unga fired a trademark long skip pass which bounced into the hands of Sevu Reece. They were behind the gain line inside their own 10 metre line, the move hadn’t worked and there seemed nothing on.

By the time left-winger George Bridge retrieved a slightly loose pass off the ground he was 15 metres behind the gain line and the Crusaders were in retreat. But he evaded two tackles with his footwork and offloaded out of a third to flanker Tom Christie who carried hard. From the lightening quick recycle, scrumhalf Bryn Hall found Reece in space on the right touchline with a double skip, blindside pass and the one-time prospective Connacht signing was away.

After making 40 metres, his pass inside found Hall, Bridge and Mo’unga in a straight supporting line for the outhalf to finish the 60 metres move under the posts.

Always the trailblazers, once again New Zealand are way ahead of the posse. Nothing new there of course but, as the final round of matches in the Aotearoa tournament approaches this weekend, it coincides with the resumption of the Premiership in England and comes a week ahead of the Pro14 returning. And yet again they have set a very high bar.

In some respects, this is merely a continuation of much of what we have seen from Super Rugby for years in that the New Zealand derbies were often the best games. But this tournament, especially when set against the Australian games, has crystallised this.

Of course, as in coping with the Covid-19 pandemic better than any other country in the world, they have certain advantages and being able to play on front of packed houses is only one of them. Conditions in Christchurch couldn’t have been better, 13 degrees under clear blues skies (and floodlights) and not a hint of wind.

As well as being an eight-round, five team format, with no knockout ties, New Zealand’s Super Rugby Aotearoa tournament has no relegation.

To further improve the tournament’s worth, even though Beauden Barrett’s performances haven’t quire lived up the hype since his high-profile arrival, the rejuvenated Auckland Blues have probably their best team in two decades.

Reiko Ioane has been reinvented as an outside centre to such an extent that he looks a likely number 13 for the All Blacks and Sunday’s finale between the Blues and the Crusaders is a 43,236 sell-out at Eden Park, even though the Crusaders secured the title last Saturday with their 32-22 win over the Highlanders. In the process, the Crusaders added this trophy to their 10 Super Rugby titles, including the last three in a row.

As Ian Smith, an excellent broadcaster in both rugby and cricket, said on commentary: “This competition deserves a big finish whatever. It deserves a celebration on the last weekend because it’s offered so much in times of hardship around New Zealand, and to other viewers around the world as well. And the quality these have produced over the last eight to 10 weeks has been just sublime.”

Likewise, commentator Tony Johnson spoke of their “great joy and privilege in bringing this competition around the world”.

They are entitled to feel proud.

Although they had, technically, nothing tangible to play for, the Highlanders took the game to the Crusaders, and led 17-7 halfway through the first half and 22-13 nearing the hour.

Nor did they throw in the towel when falling behind and down to 14 men, nearly regaining the lead through Aaron Smith after a typical piece of footwork and offloading by their outhalf Josh Ioane. A feature of this tournament has been the inventive-heads-up rugby from the outhalves.

The first of two Bridge tries in rapid succession for the Crusaders, just after the 60-minute mark, which turned the game was in large measure down to the footwork and offloading by Mo’unga and Jack Goodhue. The second pitch-length try was the consequence of an amazing left-handed offload by Luke Romano to Mo’unga. As ever in this competition, the footwork, offloading, passing and appreciation of space generally was top drawer.

The Chiefs, having won four of six matches pre-Covid, lost all eight in the Aotearoa, which has given ammunition to Warren Gatland’s critics, but they could have well have won three or four of those games – as evidenced by five bonus points. Their standing is also a sign of the tournament’s strength, and the quality of the rugby has surely contributed to increased attendances at all five franchises, again in sharp contrast to the Australian teams.

Critically, the new laws, as applied brilliantly and with consistency by the New Zealand referees, have achieved what they were clearly designed to do, namely keep players on their feet more at the breakdown and significantly reduce side entry, thereby making the breakdown safer and more of a contest.

Carriers have to place a greater emphasis on ball placement, attacking players have been obliged to wrestle players off the ball rather than fly in off their feet and clean turnovers at the ruck have been far more commonplace, as well as turnover penalties.

The poacher has been, if not reborn, then certainly revived hugely. Counter-rucking by the Highlanders led to their first-minute try a phase later when the quicksilver Smith, playing as well as ever since the resumption, picked out Shannon Frizell.

Of course, the Pro14 also isn’t affected by relegation and the Irish provincial system is akin to that of New Zealand’s five franchises. Furthermore, Leinster and the Crusaders have been having information-sharing meetings during lockdown.

Expectancy levels have been raised and granted the resumption hereabouts will quickly move into knockout mode. But the onus is on the Pro14 and Premiership to deliver now.