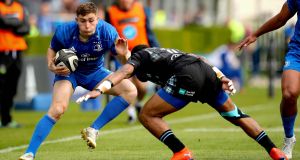 Leinster’s Jordan Larmour tries to avoid the tackle of Niko Matawalu of Glasgow Warriors during the Guinness Pro 14 game at the RDS. Photograph: Ryan Byrne/Inpho

A draw the week before last against Benetton and defeat to Glasgow on Saturday; it doesn’t matter what coach or what team, a draw and a defeat on consecutive weeks is not a textbook way to go into a European semi-final with trumpets blowing and fireworks exploding. It is not all singing, all dancing Leinster.

But Toulouse on Sunday has probably occupied Leinster coach Leo Cullen’s thinking from the moment his side beat Ulster in the Aviva quarter-final. And this week he knows he has to begin the process of tying together a team of players who have been resting, players who are returning from injury with just minutes in their legs, and players eager to get game time denied over the weeks and months.

The defeat to Glasgow won’t add much positive into the Toulouse equation. But it will add something and Cullen knows comparisons can be misplaced and the team next Sunday will bear little resemblance to that in the RDS last Saturday. Still maybe Leinster would have been better served playing a match with more riding on the outcome.

“They will have spent some time together. They will get a good week together next week. Everyone knows they have all played together at various different stages. There is a ton of experience in the group.

“We are a long way into the season, so the players have played and have experienced some very big days together. The experience is there that they can call upon. It’s just about putting a nice cohesive week together now and making sure we are all good to go.”

Nor are Leinster coming into the Toulouse match blind about what they are about to face. This will be the third meeting between the clubs in this season’s Champions Cup. The first match in round two at Stade Ernest Wallon saw Toulouse come out on top by a point, with Leinster winning the return fixture at the RDS Arena in January.

“We’ve done a bit of planning already on Toulouse,” reveals Cullen. “We’ve played them against them already. I don’t know if that’s an advantage or disadvantage. Depends on how you want to look at it. We experienced what losing to Toulouse feels like. We need to make sure we knuckle down and put in a big week’s work.”

But Glasgow being the most recent game, Cullen will pick through the bones of the match and find meat to work with. It is a psychology Leinster have grown used to over the years, not losing at home but dramatically changing teams week to week to fit into a seasonal choreography that has become familiar to the players.

“It’s picking up on bits in the game. Win or lose that’s what we would normally do,” says Cullen. “Sometimes you win a game you play terrible, sometimes when you lose a game and play well. It’s trying to have that sense of perspective all the time. So there were some good passages of play, some bad passages of play in that game [Glasgow]. So for us we’ll start on a plan that we think is good enough to get a positive performance and result against Toulouse.

“There are lots of bits from the game we can all learn from,” he adds. “There’s balancing of the group. We’ve guys coming back from injury and they’ve got valuable minutes. Guys that are fighting for spots on the team, younger players that are building layers of experience all the time so there’s this different mix of motivations.

“There are lots of positive parts. But ultimately we lost. So you talk about positives when you lose at home. There will be positive parts of the game.”

Enough at least to show Toulouse on Sunday.

Kavanagh says betting aspect of the Viking Hoard case is ‘troubling’ 18:09
Andy Murray ‘gutted’ to miss Australian Open after confirming withdrawal 17:57
Paolo Odogwu and Harry Randall named in England’s Six Nations squad 17:39
Bleak forecast hangs over hopes of racing at Navan and Thurles 15:51
Hatton roars clear in Abu Dhabi as McIlroy’s game deserts him in the desert 17:42
Here is your handy guide to sport on television this week