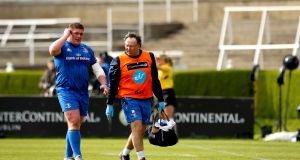 Leinster’s Tadhg Furlong goes off injured in the second half of the game at the RDS. Photograph: Ryan Byrne/Inpho

The upshot of Saturday’s defeat it that Leinster handed Glasgow a window before the Scottish side plays a derby match against Edinburgh in two weeks’ time.

Now three points ahead of Munster, who face Connacht in a couple of weeks, Glasgow’s win in the RDS puts them in the driving seat to top Conference A and secure a home semi-final.

That said coach Leo Cullen’s principle imperative was the elimination of Toulouse next Sunday, and to that end his young side was seeded with players certain to start against the French giants in their European Champions Cup semi-final in Aviva.

Robbie Henshaw played for an hour with no visible reaction, his first outing since Ireland lost to England in their opening match of the Six Nations Championship.

Devin Toner, similarly coming back from an ankle problem, played for the full match, while Rob Kearney got a run out at fullback and the entire frontrow likely to start next weekend all coming on for the second half.

Ed Byrne, James Tracy and Michael Bent gave way for Cian Healy, Seán Cronin and Tadhg Furlong, the latter causing consternation when he went down on the hour holding an injured leg. He departed with Bent returning to finish the match.

“Precautionary,” said Cullen referring to Furlong’s incident on 63 minutes, where he fell and clutched his left knee on the ground. “He was happy enough to go on there. We took Tadhg off just in case. We will get him assessed and see where he is.

“Robbie is good, nice and physical,” added Cullen about his international inside centre, who should be paired with Garry Ringrose for the Toulouse meeting. “It’s just trying to get back into the rhythm again. He played 50-odd minutes and Dev got through 80. It’s pleasing, positive for those guys to get that time.”

It was largely pre-planned, although Furlong’s knee and early departure wasn’t in the pre-match considerations.

“You are looking at various different things to see how the game unfolds and that is the tricky bit, trying to manage what is best for the individuals when ultimately we are playing a team game,” explained Cullen.

“The backroom team have done an unbelievable job in terms of getting everyone fit and available, bar a couple of guys who will be gone for the rest of the season.

“Mick [Kearney] obviously did his shoulder last week, Dan Leavy and Josh [van der Flier] but other than that, the health is very good.”

From the match Cullen will take some parts and discard others. Rob Kearney grabbing two tries having not scored for Leinster in 53 games and his brother Dave also getting two didn’t add up to a win. But both will expect game time next weekend.

Leinster trailed 12-18 at half-time with tries from firstly Dave and then Rob and Sam Johnson taking hold of a back flicked pass from outhalf Adam Hastings for Glasgow’s first, Tommy Seymour adding a second just before the break.

Both Kearney brothers scored again in the second half, Dave’s just after the hour and coming after Jordan Larmour cut and stepped into the Glasgow defence metres short of their line.

Larmour’s staccato run provided a ‘what is he going to do next?’ moment that appeared to freeze the Glasgow players, or at least pull them off balance, the winger finally touching down through a gap that he should never have been allowed to exploit.

At that stage Leinster were 24-18 in front and had raised the tempo of the game with the frontrow changes. But it was Glasgow that both wanted and needed a win more than a home side that had qualified for their home Pro 14 semi-final weeks ago.

To that end the Scots finished the stronger, and with man of the match and Scotland lock Jonny Gray leading the pack, fought back from 24-18 down to win the match.

Number eight Matt Fagerson claimed the first of two muscle tries in a seven-minute scoring phase. His came from a rolling lineout maul inside the Leinster 22 for before his brother Zander, the Glasgow tighthead prop, then barged over with Hastings converting after Glasgow had given the Leinster defence a sustained pounding.

Replacement George Horne put more light between the sides a couple of minutes into overtime. But by then the damage had been done with less fans in the RDS complaining about the rare defeat than the outcome of Sunday’s game against Toulouse.