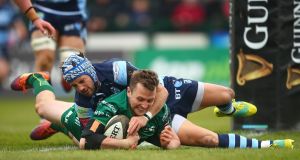 Connacht’s Jack Carty scores a try despite the tackle of Matthew Morgan of Cardiff Blues during the Guinness Pro 14 game at the Sportsground. Photograph: James Crombie/Inpho

Connacht earned themselves a mouth-watering Guinness Pro14 quarter-final away to Ulster – having won in Belfast for the first time in over half a century last October – on the first weekend in May after completing a decidedly taut yet rollicking win in this shootout with Cardiff at the Sportsground.

In the process Connacht ensured all four Irish provinces will be in both the end-of-season playoffs and next season’s Heineken Champions Cup. The most improved side in the competition this season, Connacht are there on merit too.

Although another sell-out, of 6,229, provided yet further evidence of Connacht’s need for their planned new stadium, with so much at stake you could almost reach out and bite the tension.

Choosing to play into a strong wind in the first half, Cardiff limited Connacht to a 14-7 interval lead, with the home side’s inaccuracies perhaps betraying how much they knew was at stake.

The Blues retained possession through the phases, took their time over restarts and were helped by the officiating of Mike Adamson also, with interminable re-sets at scrum time save for one direct penalty for a delayed put-in.

They had no need to force the pass and generally didn’t do so, Gareth Anscombe pulling the strings and choosing when to pull the ball back behind the pod of would-be carriers for Matthew Morgan to bring their outside backs into play and find some space on the edges.

Connacht were not at their free-flowing best but despite constructing an insufficient buffer to take into the second half, they suddenly seemed liberated. They upped their intensity and put in some big defensive sets, but most of all created and took their opportunities.

Connacht also profited from daringly running the ball from their own 22 through the offloading game of Tom Farrell and Bundee Aki, both of whom also made some big defensive plays and a high volume of tackles in largely subduing the dangerous Cardiff midfield. Jack Carty produced the play of the match to give Connacht a telling 24-7 lead while Matt Healy was always dangerous and deserved his match-sealing try.

Although the rain would not arrive until later in the evening, the wind blew strongly and straight down the pitch from the College Road end to the Bohermore Terrace. Cardiff won the toss, elected to play into the wind and on receiving the kick-off made their intentions clear when refusing to kick the ball and instead going through over a dozen phases.

Eventually, Fainga’a could not be shifted in the jackal and his opposite number Olly Robinson was penalised for holding on, but Carty, having nailed about 10 from the same spot in his warm-up, saw his 25-metre penalty from the right drift wide.

Whereas Connacht undid two fine pick-ups by Aki and Butler through an offload by Dave Heffernan which went to ground and a skip pass by Tiernan O’Halloran to Darragh Leader floated forward.

By contrast, Cardiff’s ball retention was better as another set of recycling ran down the clock in Connacht’s half before Farrell won another penalty in the jackal, and from Carty’s lengthy touchfinder Connacht struck off the ensuing line-out.

Carty did well when electing to pull the ball back in and take contact rather than risk going through with the spot move as Owen Lane pushed up for the intercept, whereupon Paul Boyle spotted no-one was at home in picking up from the ruck and charging through. Caolin Blade was on hand to take the try-scoring offload and after an interminable recourse to his TMO, Mike Adamson eventually awarded the try.

With Leader holding the ball on the tee, Carty converted and further evidence of the wind’s strength came when Cardiff opted for a scrum 30 metres out and straight in front of the posts rather than kick the penalty.

An O’Halloran intercept ended one promising Cardiff attack, and Connacht might have doubled their lead from their own 22 off Carty’s clever crosskick had Farrell completed an exchange off offloads with Healy given the latter’s pace.

Cardiff’s ability to find space on the edge became a growing threat, Jason Harries twice finding space on the left touchline in another drive which ended with Anscombe pulling the ball back for Lane, ghosting across from the right, to benefit from a dog leg between Carty and Leader, handing off the latter to skate in under the posts. Anscombe’s conversion drew the sides level.

Connacht couldn’t maximise a fine rip in contact and carry by Aki, Boyle knocking on after another attempted pick and go, but the flanker soon won a penalty in the jackal against Seb Davies for not releasing.

Carty kicked the penalty into the corner, Aki joined the maul and began pumping his legs as the Connacht pack upped the gears in a secondary drive from which Gavin Thornbury scored. Carty even landed a fine touchline conversion.

Alas, they couldn’t convert another maul and amid the prevailing tension, the half petered out anti-climactically with Cardiff running down the clock through more re-set scrums. The lead of 14-7 didn’t look nearly enough.

Connacht did have the Shed shouting in approval on the resumption when Farrell’s offload released Healy for a kick and chase, their counter-ruck then winning an attacking lineout. A second successive penalty for not releasing after the tackle enabled Carty to at least make it a two-score lead.

Better followed when O’Halloran countered to the Connacht 22 off Leader’s quick throw. Aki made a half-break and offloaded one-handed for Leader to make inroads on the right before Farrell did so for O’Halloran to release Healy on the left. A couple of recycles later, Carty took Denis Buckley’s pass and straightened through a gap, chipped Morgan and gathered on the run to take the fullback’s recovering tackle and score by the posts, his conversion suddenly giving them a real buffer into the wind at 24-7.

However, that was soon trimmed by Anscombe’s penalty and after a succession of three questionable calls by Adamson, when Connacht opted to run scrum ball Aki unusually had the ball ripped from him and suddenly Harries was diving in by the corner flag.

Kieran Marmion, just on, did enough with his tackle to have the try ruled out on review as the Cardiff winger’s left hand touched the line as he grounded the ball right-handed, albeit Marmion had to depart for an HIA and Cardiff still had an attacking scrum for the Aki knock-on.

The wind picked up after Cardiff brought on Jarrod Evans and shifted Anscombe to fullback and camped in the Connacht 22 with a sequence of scrums and three successive penalties to the corner. This culminated in Robinson being driven over to stunned silence, and again when Anscombe nailed the touchline conversion to make it a one score game at 24-17.

Incredibly though, Robin Copeland chased Carty’s restart as it hung in the wind, with reviews showing it was a Cardiff hand which palmed the ball backwards. Fainga’a hacked on and when Lane fumbled, Healy picked up and touched down adroitly as he collided with the corner flag.

After another long review, Adamson explained his decision to the respective captains, and Healy’s clenched fist informed the crowd of the good news. Now, finally, the Clan Terrace could break into the day’s first rendition of The Fields of Athenry.

But the drama wasn’t done. Harries scored wide out, and after Anscombe’s drop kicked conversion came back off the post there was still time for one more Carty restart.

After Lane reclaimed a chip out of defence by Evans, Adamson adjudged a slap down by Fainga’a was deliberate, but Connacht turned over the last lineout to seal the deal.