Leo Cullen offers apology to anyone offended by ‘throwaway remark’ 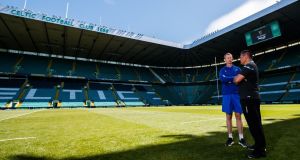 Leo Cullen has moved to defuse the furore over his post-match quip suggesting Celtic fans support Leinster on the premise that Glasgow Warriors had some Rangers fans in their ranks by making clear it was a throwaway remark which was not meant to offend anyone, but apologised if it did so.

Following Leinster’s Captains Run at Celtic Park on Friday, Cullen began his press conference by making an unprompted opening address, a thing nobody could recall him doing before.

“After the game last week, our semi-final, I made a comment that seemed to attract plenty of attention. Just so that we’re all aware, it was a throwaway remark, it was made in jest and I didn’t mean to offend anyone. For any individuals that I did offend, I apologise to them.

“But we’re delighted to be here. I made my Ireland Schools debut back in 1995 in Glasgow against the Scottish Schoolboys,” he added with a broad grin, “and we have been coming here on a very regular basis to Glasgow with Leinster. To see the progression from Hughenden to Firhill to Scotstoun and to be playing a game here in Celtic Park, it is amazing to have been part of that progression.

“We’re unbelievably excited. Leinster feel very privileged to be here and we’re looking forward to what will hopefully be a very good encounter between two very, very competitive bunches of players.”

That was where he wanted to park that subject, and hence he sidestepped another question as to whether he was surprised at the reaction to his comments.

“I can’t comment about the reaction to comments. As I said, it was made in jest and it’s taken place, so we’re looking forward now.

“We’ve tried to prepare well, we’ve been very busy in getting ready for another final. Everyone has worked hard to get to this point. The season is so unusual, the Pro 14 by its very nature, we start in September and you think of the trips we’ve had along the way,” said Cullen, charting their journey form an opening 33-32 win over Cardiff on August 31st, their trip to South Africa, the Christmas derbies, the Six Nations interregnum and fighting on two fronts all the way to both finals.

“We’ve used a huge chunk of players to get us to this point, 57. Glasgow are in a pretty similar situation themselves and we’re two teams that are affected in the most similar fashion in that we lose a lot of players to the national team. That’s such an important part of both clubs’ models that they run.

On his first visit to Celtic Park, Cullen described the stadium as “amazing”, and added: “We’ve had unbelievable support all season, we played a final in Newcastle a couple of weeks ago and even though we lost that game it will still go down as one of the highlights of my Leinster career when we pulled up at the stadium and saw the sea of Leinster supporters there.

“Ultimately we couldn’t quite deliver on the day for various different reasons. But we’ve a chance to play in the final, support plays a massive role in any team. I’ve just heard they’ve over 50,000 season ticket holders here at Celtic which is an incredible number. I think every rugby club out there is dreaming of that day when you can call on 50,000 season ticket holders to support you week in, week out.

“We need to try and get a bigger ground maybe, in Dublin,” he added wryly.

Cullen has made three anticipated changes to his starting XV, with Scott Fardy, Rob Kearney [whom he was “hopeful” would sign a new contract] and Johnny Sexton all restored, along with Ross Molony on the bench in the absence of the injured Devin Toner, and their re-instated captain said they had to relish the challenge of taking on the Warriors in Celtic Park.

“We have to try and cherish that, don’t we?” said Sexton. “I think Saracens are a great example over the years of a team that have thrived in other teams’ back gardens. We need to try and take a little bit of that into tomorrow.

“It’ll be 23 of us against probably 40,000. I don’t know how many Leinster fans will make it over having put their hands in their pockets to come to Newcastle. We probably let them down there a little bit and want to repay them. It’ll be a tough challenge for us, but one we’re looking forward to.”

Jordan Larmour moves to the wing, with Dave Kearney missing out, while Ross Byrne reverts to the bench as understudy to Sexton, who spoke freely of his difficulties in coping with a stint as a replacement against Munster last week.

“Tough,” was how he described it. “When you do sit on the bench you have so much respect for the guys who do it regularly it is a horrible job to do, you are probably more relaxed leading up the game and then the game starts and you are full of nerves. You feel like everything is happening around you when you are dropping the warm-up and then you try and come on and get your second wind.

“When you are lucky enough to start a lot of games you really appreciate it. It was well mapped out, it was well planned, Leo does an unbelievable job in mapping out our whole season for our whole squad and getting us when he can and trying to manage us.

“Look, I would rather have played from the start but it was great for Ross because he has got us to this position so it was great for him to showcase and show what he is made of because obviously when it comes down to World Cup selection he is right in the hunt and last week will have kept him there as well.”

Alas, the final has come too soon for Seán O’Brien, who will not be able to make his Leinster farewell in this final and instead has played his last game after a dozen seasons with the province in the Champions Cup final against Saracens.

“He has been struggling a bit with a hip injury that has been ongoing for a while, which ruled him out of this week,” said Cullen.

“Max [Deegan] has been going really well. Max might be one of our highest minutes in terms of Pro 14 this year so he has made a huge contribution towards getting us to this point. He provides us with good versatility across the backrow as well.”

“Dev with his medial injury, it won’t be anything too major, but it is a 4-6 week injury,” said Cullen, which means the lock should be available for the start of Ireland’s World Cup training on June 16th.

“Ross [Moloney] who was out with his back comes back in so it is nicely timed in a way. Dev is obviously a loss for us, as is Seán from an experience point of view, but the other guys have probably played more games in terms of getting the team to this place.”