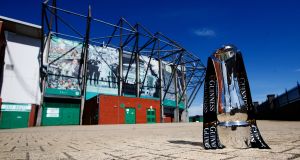 This weekend Glasgow Warriors and Leinster will go toe-to-toe in the Pro14 final at Celtic Park. Photograph: James Crombie/Inpho

Kearney comes in at fullback with Jordan Larmour moving to the right wing and James Lowe continuing on the left.

Robbie Henshaw and Garry Ringrose are again in the centre with Luke McGrath and captain Sexton the half backs.

In the pack Cian Healy, Seán Cronin and Tadhg Furlong start with Fardy and James Ryan in the secondrow behind them.

In the backrow, vice-captain Rhys Ruddock starts at blindside flanker with Josh van der Flier on the openside and Jack Conan at No. 8.

Meanwhile Glasgow head coach Dave Rennie has stuck with the side that beat Ulster 50-20 at Scostoun in the semi-final last Friday - the inclusion of Siua Halanukonuka on the bench the only change to the matchday 23.