Felipe Contepomi praises secondrow after his recovery from a shoulder injury 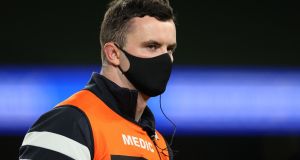 James Ryan is in line to return to the Leinster side for Saturday’s Guinness Pro 14 clash against Ulster at the Aviva Stadium. Photograph: Billy Stickland/Inpho

Such is their incomparable strength in depth that, as ever, Leinster will have a raft of tricky selections to ponder over before finalising their side to face Ulster in Saturday’s Guinness Pro14 final at the Aviva Stadium. Not the least of those will be in the secondrow on the fairly safe premise that James Ryan returns to the engine room.

The 24-year-old hasn’t played since rugby’s return due to a shoulder injury sustained in training which required a procedure, and has actually been restricted to just one appearance in the Pro14 in the 2019-20 season. But apparently Ryan had been pencilled in for a return against Munster last week and thus looks sure to start against Ulster.

“It’s always great to have players like James available, and he’s been looking good,” said the Leinster backs coach Felipe Contepomi on Monday. “I think he’s a guy with such a quality that if he’s fit it just shows the quality of the player he is, and he’s made a really good recovery. So I’m glad for him and hopefully he can be part of it on the weekend.”

If, as you’d also expect, Ryan is straining at the leash, he doesn’t let it show unduly, according to Contepomi. “For his young age he’s so mature that he really has a lot of self control and an understanding of the situation.

“Probably he’s bursting inside to go and raring to go, but he shows that poise and calmness of a 30-plus-year-old and he’s only 20-plus.”

By contrast, Contepomi admitted the prospects of a return for Tadhg Furlong and Dan Leavy would be clearer later in the week.

But this being a final, Leinster will again put out what they believe is their best available XV and matchday 23.

“There are a lot of variables we have to look at and it’s not about rotation, it’s about getting who is ready to go and to do a job for the whole 53 players that took us to that final,” added Contepomi.

“Unfortunately it’s only 23 that will be able to step onto the pitch, but they represent 53 players that made a huge effort throughout the whole year for us to be where we are now.”

“So it’s a good place to be at the moment, in terms of they understand exactly the guys that are playing are the luckiest ones or the ones that got the nod. But it’s very hard to make some decisions there, they’re so, so tight. But that’s life, that’s the way it is.”

“What we need to learn, is not to get dragged into a game of contestable box kicks fest. There has to be more space,” ventured Contepomi.

“Actually when you analyse the game, we didn’t have much time with the ball but the time we had, we had some good attacks. The new interpretation of the law is posing those questions of the risk-reward, how much you play, how much you can play.”

“Sometimes I think we’ll find more teams that come with tactics like Munster used against us last Friday. We can’t control that, it’s their tactics. What we can do is how we deal with those tactics a bit better and take teams to where we feel more comfortable, playing a more expansive sort of game,” said the Leinster backs coach, noting that the ball in play time was down from the usual 38/39 minutes to 32/33 in what he called a “very chess-like” game.

Akin to that Munster rematch, Leinster beat Ulster two weeks ago, but the latter’s thrilling and daring comeback win away to Edinburgh was a reminder that, a la last season’s white knuckle ride in the Champions Cup quarter-final, and even the 54-42 romp at the RDS last December, Ulster will have a go.

“That quarter-final, it was a hell of a game and they definitely are a much better team now even than they were that day. It was so even, I think they were probably even a bit unlucky that day,” admitted Contepomi.

“Ulster for me are definitely one of the best sides in the league, and one of the best side in Europe, in terms of the balance they’ve got. They have a very well-coached defence by Jared Payne; a very good attack with Dwayne Peel there, and Dan [McFarland] with the skills.”

“They’re a skilful team, a powerful team, they have punch going forwards, they’re a very complete team if you see them and they’ve been building. It’s not like they came from nowhere and suddenly they’re in the final.

“They’ve been building for the last few years and with Dan we can expect them to be really firing up front, a good scrum and maul. They’re a very complete side and when you analyse them, when you scout them, it’s hard to find any real weaknesses.

“We know that to beat them we’ll need to go for 80 minutes from minute one because they’re a side that doesn’t give up, but not only that they play really good rugby, with and without the ball.

“So I’m expecting a really big, big challenge from them and we need to step up one or two gears to be able to win the game.”

No underage or minor GAA to be allowed under Level 5 Covid-19 restrictions 08:53
Ole Gunnar Solskjaer hails players after win over PSG 07:57
Rashford gives Man United another win in Paris; Gordon D’Arcy on Finn Russell 07:34
Seán Moran: Let’s leave the confusion aside and enjoy this All-Ireland 06:30
Gordon D’Arcy: Ireland don’t need to do a Finn Russell on it 06:00
Here is your handy guide to sport on television this week