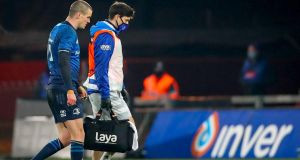 In time-honoured fashion Leo Cullen sought to play down another Johnny Sexton injury scare but without really being able to shed much light on what seemed like a worrying recurrence of his hamstring injury just two weeks out from the 2021 Six Nations and the opener away to Wales.

“It was precautionary,” said the Leinster head coach. “He’ll be in Irish camp next week so he’ll be assessed.”

In the event, Leinster saw out a highly creditable 13-10 win over Munster in Thomond Park despite the loss of Sexton, a slow start and several other glitches in the performance.

“We were very, very slow at the start, from our end there were lots of parts of our performance that weren’t great now,” said Cullen. “I don’t know if it was the snow we saw when we arrived, but when we kicked off it had stopped!

“We were 10-0 down with a mountain to climb but even though there were parts of it we didn’t deal with very well, either side of half-time we had a lot of pressure when we got turned over at the breakdown when we had pick and go opportunities near their try line.

“At this level we have to be better. We need to be better, there’s a bit of a split now in camp, a lot of lads will go to Ireland camp and we’ll turn our attention to the Scarlets in Wales next week.”

Having led 10-0, hit the post with one penalty and missed another, of all their last five defeats on the spin to their auld enemies this one will have really hurt Munster.

A big personal performance in front of the watching Paul O’Connell and the Man of the Match award was no consolation for Tadhg Beirne. His and their collective disappointment was acute.

“Big time,” he said. “We just left a lot out there, we felt we had most of the possession for the majority of the game and defended them quite well, we had a bfwe knock ons at the end there, they’re big moments and we have to win them.

“I look forward to seeing that last lineout because it wasn’t crooked from where we were, but it’s still no excuse, we really feel like we should have won that today and obviously we’re bitterly disappointed.

“Look it, I think we matched them physically and I think we would have won that game if we did things a little bit better.”

“Everyone looks at Leinster as this kind of unbeatable team but I think we’ve proved here today that we’re definitely matching them and I think on another day we would have taken the win.

“As a defence we were really fronting up and we felt comfortable in that area, when they were inside our 22 we really felt like we weren’t going to let them score, it’s just disappointing we let them score off a set-piece and that was the deciding of the game.”