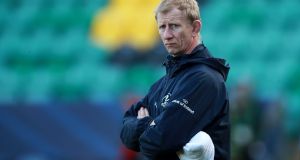 Leo Cullen: ‘When you come up against the best teams you’ve got to make sure you get a lot right on the day.’ Photograph: David Rogers/Getty Images

Ever since their exit from the Champions Cup, Leinster have been told the Pro14 didn’t toughen them up sufficiently for the quarter-final with Saracens. Now there’s the prospect of the South Africans being, well, too tough.

Leo Cullen doesn’t subscribe to the theory that the Pro14 is inadequate preparation for Champions Cup rugby, but that being said, while some may have misgivings about the South African heavyweights joining the competition, the Leinster head coach would welcome their arrival.

“I don’t know the exact specifics of it but it has to be a positive for the quality of the competition we’re in, for sure, because they’re four quality teams with unbelievably strong tradition, they’re breeding grounds for seriously talented players.”

Noting how the Bulls, Lions, Sharks and Stormers provided the Springboks with a World Cup-winning squad, Cullen added: “They’re four powerhouses and what it’s going to do to the competition, it definitely beefs it up.

“Exactly what that format looks like, we don’t know, but the experience of playing those teams will raise the standard of all those teams playing in the Pro14. So whatever that number is, Pro12, Pro14 or Pro16, yeah I think that’s a positive.”

Cullen also echoed the thoughts of Stuart Lancaster regarding the Pro14 not prepping them for Europe.

“I don’t buy into that really. We have our way of doing things because of the way the Irish provinces are feeders for the national team, we’re not shopping the four quarters of the globe for players and I think that’s a good idea if you want to have a strong national team, because that’s the figurehead and we’re all trying to feed into that as well.

“When you come up against the best teams you’ve got to make sure you get a lot right on the day,” said Cullen, noting that Saracens had five World Cup finalists in their pack. “If we’re being very truthful here, we didn’t get enough right on the day. Some of that is in our control, some of that was the opposition putting us under pressure.”

A half dozen of Leinster’s starting line-up against Saracens, and two more off the bench, are 24 or under and Cullen added:

“For us, with some young guys and it being their first experience of that big pressure-cooker type game, they’ve got to go through that to really learn sometimes. That’s the process we’re happy to keep going through.”

Even so, at face value, resuming so soon and especially in empty stadia, has a distinctly anti-climactic look to it.

“It’s our bread and butter as well,” Cullen countered. “You turn up for work and our job is to go out and represent Leinster on the weekend. It doesn’t matter who the opposition is. We need these games because this is the day-to-day business that we’re involved in.

Quite how Leinster top an unbeaten Pro14 campaign is a moot point. Then again, they won’t need to repeat the feat to win the tournament for a fourth year running, which seems a minimum target.

“Yeah, but I think we need to take it step by step,” said Cullen. “A win against the Dragons will help us at the start. We’re not really setting too lofty goals at the moment. Get off to a good start, try and get every point available that’s on offer on the day so that would be our mantra for the time being.”

Indeed, the Dragons are upwardly mobile under Dean Ryan, who has included his high profile summer signings.

“They’ve got plenty of talent. They’ve signed some good players over the summer with lots of experience plus they have some really good young players that have just gone through that process,” said Cullen.

“Aaron Wainwright is probably one that stands out a really good young player. He played for Wales at the World Cup and they’ve got plenty of experience there as well. They’re going to be a handful for us and we need to make sure we’re on our game. It will be a good challenge for our guys.”

Sad loss of Jerry Kiernan felt far beyond the world of athletics 21:38
Paul Mannion steps back from Dublin panel for 2021 intercounty season 19:43
Aidan O’Brien fined €4,500 following mix-up between horses at Newmarket 17:34
Conor McGregor remains keen on rematch with Khabib Nurmagomedov 16:41
Ireland fall to Afghanistan in opener despite McBrine and Tucker heroics 17:49
Here is your handy guide to sport on television this week