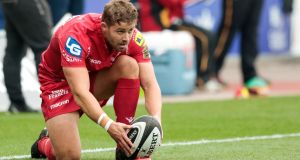 The Scarlets travel in expectation rather than hope as they attempt to equal a club record of 10 successive league victories.

They are bolstered in that quest by the availability of three Lions, Leigh Halfpenny and hooker Ken Owens, who start and Jonathan Davies, named among the replacements.

The reigning champions arrive in Belfast unbeaten having already re-established the entertaining and effective patterns of last season.

Ulster in contrast are without a handful of front-line players, primarily because of the national player management programme and injury denying them the services of Rory Best, Iain Henderson, Marcell Coetzee, Charles Piutau and Craig Gilroy to highlight five.

Chris Henry returns to captain the side, Alan O’Connor, Kyle McCall and Luke Marshall are also promoted to the starting team, while Tommy Bowe drops to the replacements having played the first two league matches.

In a late change to the team Jean Deysel was withdrawn after sustaining a minor eye injury in training with Matty Rea coming in on the blindside flank and Sean Reidy moving to number eight.

While there was much to admire in the way Ulster played in victory over the Cheetahs, their second half performance against Benetton Treviso was hugely disappointing.

Tonight will be an emotive occasion for Ulster players and supporters, five years to the day since former centre Nevin Spence, his father, Noel and brother, Graham died tragically in a farming accident.

The home side will be determined but that alone will not suffice.