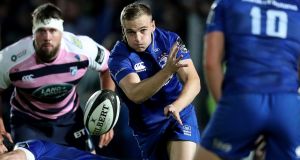 It was, said Cullen, a complex management of players and that only 28 could travel was an additional load. The match schedule was also put together hastily about five weeks before the competition was due to start.

The trip south was also different in nature to regular away matches to Italy, the UK or France, when Leinster would typically charter a plane for players, management and supporters.

They would travel over together and come back together. In South Africa, the players are not coming back together but with a group leaving on Saturday, a day after Friday’s second match against the Cheetahs and another group following on Sunday.

In that scenario, Cullen had to decide what players were likely to be lining out the following weekend against Edinburgh so that they would be the first group to arrive back to Ireland.

Coach Stuart Lancaster is also due to return on the Thursday before the second match to prepare the Dublin-based players, many of them Lions, for that same Pro 14 match. It was a logistical nightmare.

“Just get on with it,” was Cullen’s view. “The majority of the party will come back a day later. We might get about 10 guys back on the Saturday night. We play our second game on the Friday night so we’ll try get out of Jo’burg. There’s about 10 going out on the Saturday night, everyone else will stay back until Sunday night and get back here on Monday for a game on Friday. It’s tight but we’ll get on with it.”

When Isa Nacewa and Jamison Gibson-Park were refused entry to South Africa because they carried New Zealand passports, it was was a blunder that Leinster confirmed on Thursday was due to an administrative mistake made by them as they overlooked an adjustment to the visa requirements of New Zealand nationals entering South Africa.

The change of status was made by the South African authorities on January 16th and acknowledged on Thursday morning by Guy Easterby, head of rugby operations, Leinster Rugby.

“As of 16 January 2017 a visa is required for New Zealand nationals entering South Africa,” said the Leinster statement.

“Unfortunately this visa was not applied for by Leinster Rugby on behalf of Jamison Gibson-Park and Isa Nacewa in advance of the squad leaving Dublin Airport on Tuesday afternoon,” added the former Irish scrumhalf.

“It was only brought to our attention upon landing into Johannesburg on Wednesday morning that this was now a requirement. This was clearly an administrative oversight on our part and a valuable lesson has been learned. Nick McCarthy will arrive in later today and for the moment no other player will be called up to the squad.”

McCarthy is an Academy player who has lined out nine times for Leinster. A Former Irish Under-20 captain, who played on same team at St Michaels’ school in Dublin with outhalf Ross Byrne, he may appear as an innocent being thrown into the lions’ den.

But the scrumhalf was quick to make an impression when he made his first start for the province in April on a night Leinster beat Glasgow 31-30 in a thrilling game in which the lights failed in the RDS. Man of the match that night was McCarthy.

Meanwhile former Springbok captain John Smit told Sky Sports that the South Africa’s franchises in the PRO14 will struggle for a year or two before becoming competitive.

“The problem we have is that we’ve got six teams, and we can’t afford six teams. The Kings and the Cheetahs are going to struggle for year one and year two,” said Smit.

“The unfortunate thing is that they are the two weakest teams and the two teams with the smallest budgets in South Africa.”