‘As sometimes happens in training there was some pushing and shoving, that’s about it’ 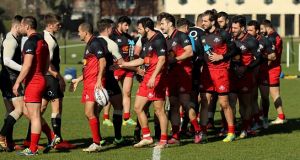 England forwards coach Steve Borthwick has played down the clashes that took place between England’s and Georgia’s players during training on Wednesday as routine “pushing and shoving”.

It was reported that the session, at St Edward’s School in Oxford which was watched by young pupils, became so heated that punches were thrown and the two groups had to be separated.

Georgia had been invited to join their preparations for the Six Nations fixture against Italy on March 9th, and Borthwick said: “As sometimes happens in training there was some pushing and shoving and that’s about it. You get on with the next scrum.

“The guys scrummed hard against each other, there was some pushing and shoving, which happens in rugby. It happened quite a lot throughout my career — a bit of pushing and shoving that settles down and you get on with what you need to do.”

Asked if England would reconsider extending similar invitations to Georgia in future, Borthwick said: “We’re always looking at what the best training’s going to be for us going forward, and these two days have been excellent — really good for the team.

“It’s good experience, and good competition on the training field, which is excellent, exactly what we want.

“Our training plans going forward, we’re always looking at how we can improve them.