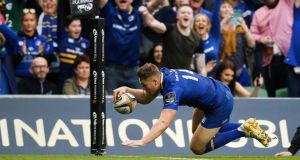 Jordan Larmour crosses for Leinster during the Pro14 final against the Scarlets. Photograph: Tommy Dickson/Inpho

Ireland and Leinster’s Jordan Larmour has been nominated for the 2018 World Rugby Breakthrough Player of the Year award.

Larmour signed professional terms with the province in January and went on to enjoy a staggering year - making his Ireland debut off the bench against Italy in the second game of the Six Nations on February 10th.

He went on to feature in the final two games of the successful Grand Slam winning campaign, as well as all three Tests during Ireland’s 2-1 summer series victory over Australia.

The 21-year-old was also a key part of the Leinster side who ended the 2017-18 season as Pro14 and Champions Cup winners - starting both finals and scoring a spectacular try in the 40-32 win over the Scarlets.

Larmour is one of three nominations for the award, along with South African winger Aphiwe Dyantyi and All Blacks prop Karl Tu’inukuafe.

24-year-old Dyantyi has been symbolic of the Springboks’ revival under Rassie Erasmus, scoring against England on his Test debut in June.

He has scored six tries in his nine international appearances - including a brace during the famous 36-34 win over the All Blacks in Wellington.