Kieran Marmion is back in the Connacht team 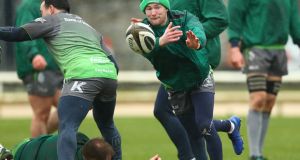 Connacht scrumhalf Kieran Marmion has returned from injury to take his place in the Connacht side to play Glasgow Warriors in Scotstoun on Friday night (kick-off 7.35pm).

Marmion came off the bench in Connacht’s victory over the Cheetahs last week, but this will be his first start since Ireland’s win over the All Blacks in November.

Marmion forms a halfback partnership with 21 year old academy player Conor Fitzgerald who comes in for Jack Carty. Fitzgerald’s brother Stephen is set for his second consecutive start on the wing and is part of a back three that includes Matt Healy on the opposite wing and Tiernan O’Halloran at fullback.

Kyle Godwin and Tom Daly form the midfield partnership, with Bundee Aki and Tom Farrell away on international duty.

In the forwards, Dave Heffernan comes in at hooker in a frontrow that includes loosehead Denis Buckley and tighthead Finlay Bealham. Sligo man Cillian Gallagher starts in the secondrow alongside James Cannon.

In the backrow, head coach Andy Friend has retained the same trio that started in the win over Cheetahs last weekend. Team captain Jarrad Butler stars at number eight with Eoin McKeon and Colby Fainga’a at blindside and open side respectively.

Ahead of the trip to Glasgow, Friend spoke of the importance of the fixture for the overall standings in the conference; “It is extremely tight in our conference with only a few points separating four or five teams, so every game takes on an even greater importance now. We have picked a side with a good blend of youth and experience and I have full confidence in them to get a result on Friday night.

“The real positive this week is to see Kieran Marmion back and raring to go after a period of injury. He has worked really hard over the past few months to regain his fitness and he is looking forward to his 150th appearance in a Connacht jersey. It’s a significant milestone and something to be proud of for him and his family.”