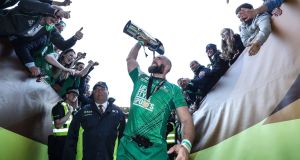 Connacht veteran John Muldoon celebrates in front of the fans after the Pro12 final victory over Leinster at Murrayfield in May 2016. Photograph: Dan Sheridan/Inpho

Rugby, like sport, is littered with huge one-off upsets, be it Munster beating the All Blacks in 1978, Japan toppling South Africa, France’s two World Cup wins over the All Blacks. But a tremulous shock over the course of the season, ala Leicester winning the Premier League in 2015-16, is something else.

There was something in the air that season. Connacht had started the Pro12 season as 50/1 outsiders and there wouldn’t have been many takers, if any.

Since the advent of the Interprovincial Championship in the 1946-47 season Connacht had never won it outright once, managing three shared titles in 1956, ’57 and ’65.

In the previous 11 seasons of what had become the Pro12, Connacht finished tenth seven times, ninth once and eighth twice before a high of seventh in 2014/15.

In Pat Lam’s first season, there had been a landmark win in Toulouse before he brought in Tom McCartney, Mils Muliaina and Bundee Aki. Although all three did not arrive until October 2014, Connacht won their first three games in their absence, including Leinster at the Sportsground, ultimately finishing seven points off their top six target. But missing out on the Champions Cup may have been no bad thing.

Lam had brought in Dave Ellis as skills coach and Andre Bell as attack/kicking to help fine-tune a daring running game and then promoted Jimmy Duffy as forwards’ coach after Dan McFarland departed.

With the World Cup overshadowing the first two months of the season, opportunity knocked. Connacht won six of their first seven games and earned two bonus points from their 33-32 defeat away to reigning champions Glasgow.

Connacht’s opening Challenge Cup game was away to Enisei in Krasnoyarsk in Serbia. They left on the Tuesday, earned a bonus point win in temperatures which dipped to minus 23 on the Saturday, when their scheduled return charter was first delayed and then cancelled.

Eventually their party of 42 had to be divided into three, and they arrived home eight days after leaving Galway. Turning adversity into a memorable trip, in many ways it was the making of their season.

“It was one of the great trips,” recalled captain John Muldoon.

With that win in Krasnoyarsk the only away victory in the pool, Connacht would qualify for the quarter-finals.

A week after beating Brive at home, Connacht travelled to Thomond Park where they hadn’t beaten Munster in a competitive game since 1986. Injuries forced them to rejig too. The pack featured two academy players, 21-year-old hooker Shane Delahunt, and the debutant flanker James Connolly (22), as well as two first year graduates, Ultan Dillane and Eoin Masterson, while a third academy player, the 20-year-old Sean O’Brien, make his debut off the bench.

Lam’s policy of having a core of academy players train with the rest of the squad was bearing fruit. Connacht had to withstand 10 minutes of pressure with John Muldoon in the bin before Aki sealed the win with a wondrous finish at the corner flag from an offload by Robbie Henshaw. As after every win, the squad sang The Fields of Athenry in the away dressing-room.

Hitting a mid-season buffer, Connacht lost four games in a row against Cardiff, Ulster, Leinster and Scarlets, but a maul-driven bonus point win over the Scarlets at home steadied the ship. Four more followed during the Six Nations, including a thrilling bonus point win in Edinburgh, after which they also resolved on an exit strategy of running rather than kicking the ball.

They also welcomed back five players from Six Nations duty for a 7,300 sell-out against Leinster when grinding out a 7-6 win after Kieran Marmion scored a first-half try from Niyi Adeolokun’s chip. Into a second-half gale, Eoin McKeon led the defiance with 23 tackles.

Although losing 18-10 away to Ulster in Belfast, they defied the home side with 13 men in the endgame and even threatened a losing bonus point. They also lost a Challenge Cup quarter-final thriller 33-32 in Grenoble on a night when Matt Healy was simply sensational at fullback and Adeolokun caught fire.

But like all their title rivals, Connacht would then have two idle weekends in the seasonal run-in rather than competing on two fronts.

Ten minutes after the game Muldoon said to Lam: “That’s the best thing that’s happened to us.”

A week later, trailing 14-3 nearing at half-time in front of a near 8,000 sell-out in Galway against a Munster team in do-or-die mode, an Aki-inspired Connacht blitzed the visitors either side of half-time to win 35-14.

Much changed, Connacht did slip up in Treviso, albeit the bonus point sealed a semi-final spot. Glasgow overtook them with a 70-10 win over Zebre, their ninth in a row, before the two sides met at the Sportsground – effectively a shoot-out for a home semi-final between the same sides.

Privately, Muldoon and the players agreed that this was their unofficial quarter-final, that whatever chance they had of beating them in a semi-final at the Sportsground, it was a hell of a lot better than in Scotstoun, where Glasgow were unbeaten all season.

Connacht had also lost the previous eight meetings with Glasgow, including a 31-13 loss in Galway a year previously.

On a sodden day in the West, in front of another 8,000 sell-out, Aki’s typically powerful first-half finish off MacGinty’s flat carry and offload had been cancelled out by a Gordon Reid try, before the game pivoted on a 51st-minute red card for the Glasgow prop Sila Puafisi. Tiernan O’Halloran’s soaring try off Shane O’Leary’s pinpoint crosskick sealed a home semi.

Now peaking nicely, Connacht then produced possibly their best performance of the season to date. Adeolokun was the match-winner, gathering Aki’s deft grubber on the run and using his footwork to leave three opponents trailing before sprinting away from 50 metres. Down to 14 men, Connacht withstood a late siege to earn a final against Leinster in Murrayfield the following Saturday.

With a day’s less notice than Leinster, and with limited availability due to the Edinburgh Marathon, 10,000-plus Connacht fans descended there via planes, trains, boats and cars. For example, Eric Elwood booked a trip with his wife and kids via a Friday morning ferry from Belfast to Scotland.

A sea of green and an impassioned rendition of the Fields greeted the squad when the bus pulled up at the main entrance in Murrayfield’s East Stand.

“I could feel the water in my eyes,” said Lam, who was the first to step out of the bus. “It was like being in a coliseum. The fans were around us and all above us, and we were hit by this wall of noise. My arm was shaking as I picked up my bag.”

Muldoon said he could have run out and played there and then, without any warm-up.

Conditions on a sunny day, with Nigel Owens as referee, were perfectly set for Connacht’s running game. Their back three of Adeolokun, O’Halloran and Healy, had scored 19 tries between them.

Adeolokun, born and reared in Ibadan, Nigeria, had moved to Dublin when he was ten and had been cut from the Leinster system at 19. Ditto Healy at 20, before they landed in Connacht via Trinity and Lansdowne.

As the players went out on to the pitch Lam hugged each of them individually before calling the back three aside.

Initially, it was all Leinster before Connacht worked the ball wide to Healy for a trademark kick and chase to earn an attacking lineout. The roar from their supporters lifted them and the stadium.

“It’s amazing how little moments like that can lift a team emotionally,” said Muldoon.

In the 12th minute, Healy gathered Eoin Reddan’s box kick inside his own half and countered. From Muldoon’s one-man clean-out, Finlay Bealham and Aki moved the ball to O’Halloran, who escaped Jamie Heaslip and used a two-on-one with Robbie Henshaw to dummy past Rob Kearney and score.

Ten minutes later Healy countered off another Reddan box kick and linked with O’Halloran, who exchanged offloads with Henshaw and popped a pass to Aki. Marmion swept around Aki to gather his pass behind and scooped the ball to Aadeolokun, who chipped a first time volley and caught the ball on the bounce to dive over in one smooth movement. A MacGinty penalty made it 15-0 at the break.

Johnny Sexton opened Leinster’s account with a scrum penalty but after the 55 minute mark Marmion countered off a turnover with a 40-metre break.

From the ensuing scrum and a few rucks later, the predator Healy called for a chip through by MacGinty and pounced, making it 20-3. Leinster rallied, Sexton converting a 68th minute Sean Cronin try, but Connacht ran down the clock with a succession of penalties and mauls.

After raucous celebrations inside and outside the ground, in Edinburgh airport and on the flight home, the squad were greeted by thousands in Knock Airport at 1am. Bonfires and cheering crowds littered the drive back to Galway, which they reached at 3.30am.

Despite the thousands still making their way back from Scotland, 10-15,000 turned out for the victory parade to the Sportsground the next day.

Muldoon retreated to the back of the bus with some of those he’d soldiered with for a long time. For years and years they’d watched all the successes and big days which the other provinces had enjoyed.

“It was nice to finally have our day,” said the Connacht captain.

Some season, some day, some upset.

Golf courses to close under Level 5; Andy Farrell names team for Italy clash 07:45
Connacht coping with Covid case and injuries ahead of trip to Edinburgh 07:00
Dundalk quietly confident ahead of Europa League opener 06:00
Molde unlikely to see themselves as also-rans as they face Dundalk 06:00
Measured approach sees Ireland women’s rugby squad taking shape 06:00
Here is your handy guide to sport on television this week