Five French rugby officials released after over 24 hours of questioning

French federation chief Bernard Laporte was among those being questioned 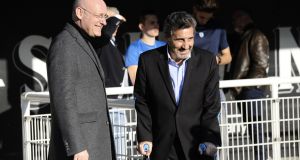 Five leading figures in French rugby, including the federation president Bernard Laporte, were released from custody on Wednesday night after being detained beyond 24 hours for further questioning by the Brigade for the Repression of Economic Crime (BRDE).

The five men had been questioned in the latter’s Parisian offices since Tuesday morning as part of a preliminary investigation opened by the National Financial Prosecutor’s Office (PNF) in 2017.

In addition to Laporte, Serge Simon, vice-president of the FFR, Mohed Altrad, the president of the Montpellier club, Claude Atcher, general manager of France’s successful bid for the 2023 World Cup, and Nicolas Hourquet, head of international relations at the FFR, had all been asked in to the BRDE offices.

After two days of interviewing, the BRDE findings will now be referred to the PNF, which can decide to continue the preliminary investigation, open a judicial investigation entrusted to investigating judges, close the case without prosecution or issue trial proceedings.

The five men have been asked about “everything”, Simon’s lawyer Pierre Blazy told AFP outside the front of the BRDE offices.

In what has become known as the Affaire Altrad, Laporte has reportedly been questioned about his alleged intervention in favour of Montpellier with the FFR’s appeal committee to reduce sanctions against the club in June 2017. Altrad is both president of Montpellier and the main jersey sponsor of the French national team.

Another subject of interest for the investigators, according to Simon’s lawyer, was Altrad’s support for France’s successful bid ahead of South Africa and Ireland to host the 2023 World Cup.

Repeating claims in the satirical weekly newspaper Le Canard Enchaîné, the sports daily L’Equipe reported that Laporte, Atcher, Simon and Hourquet boarded a private plane owned by Altrad, to support the French candidacy in Mongolia and Georgia, in May and June 2017.

“We ask about odds and ends that took place two years ago,” complained Blazy. “It is scandalous because they could have been questioned in the context of a free hearing, or in 10 days. This is 10 days from the elections.”

This is in reference to the FFR presidential elections due to be held on October 3rd when the 56-year-old Laporte, who is also vice-chairman of World Rugby, is seeking a second term as president. He is opposed by Florian Grill, 53, a business executive who founded his own media and marketing consultancy agency.

Although Grill has refused to comment on the developments of the last two days, Laporte’s lawyer Jean-Pierre Versini-Campinchi – who has said that the file against his client is “empty” – denounced the publication of an interview with Grill in Le Figaro on Tuesday as “obscene”.

In the interview with Le Figaro, Grill described Laporte’s first term as “catastrophic” and added: “Bernard Laporte was a successful coach, but he was not made to be president of a federation.”

“It’s not what Florian Grill says in Le Figaro that matters to me,” Versini-Campinchi told Midi Olympique. “It is the obscene timing of this interview, broadcast the same morning when his opponent is questioned by the police. We are not asking Monsieur Grill to grieve but at least not to choose this moment.”

When it was pointed out to him that the timing of its publication was a matter for Le Figaro, Versini-Campinchi said: “I don’t believe in chance. Monsieur Grill could have asked that the interview not be broadcast at this precise moment, that’s all.”