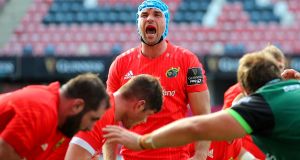 Tadhg Beirne lines out during the “A” Interprovincial against the Connacht Eagles at Thomond Park in Limerick. Photograph: James Crombie/INPHO

Munster’s opening game of the Guinness Pro14 2020-21 season at Parc y Scarlets will be a novel one for Tadhg Beirne. He played 56 times for the Scarlets in two career-transforming seasons but over two years on he will play against them for the first time in a Munster jersey on Saturday.

Indeed, having played a whopping 3,983 minutes for the Scarlets in those two campaigns, thus far he has only played six minutes of rugby against his former team and that was back in October 2015 in his third of just four appearances off the bench in his final year in the Leinster academy.

“Yeah it will be my first time lining up against them, so it will be a bit of a strange one. Going back to Parc y Scarlets, ideally it would be nice going back there with a bit of a crowd there,” he admits, before a wry double take. “But it probably works out in our favour that there’s no crowd as well because I know how effective they can be over there.”

He’s stayed in touch with some of the Scarlets players but there’ll be no get-togethers over coffee, just a quick on-field chat either before or more likely after the game. Such is the way of things nowadays.

After being released by Leinster, the Scarlets didn’t so much launch his career as save it, for otherwise he would have augmented his real estate management course with a masters and called it quits.

Beirne was a virtual ever-present at the Scarlets, where his all-rounds skills and ability over the ball were the springboard for the Scarlets’ lethal transitioning from defence to attack and Wayne Pivac described him as “probably one of the best signings the club has ever made.”

He’ll be forever grateful. “That’s where I got my opportunity and I’ll always be thankful to Scarlets for that. I thoroughly enjoyed my time there and I was successful there as well, winning silverware, so I look back on that part of my career with a big smile on my face, for sure.”

Beirne was part of the Scarlets team that beat Leinster at the RDS and Munster at the Aviva to win the Pro12 in 2016-17 and was voted the Pro14’s Players Player of the Season the following year, adding 37 turnovers to his 20 from his first campaign, as well as ten tries in 30 games overall.

However, the Scarlets lost to Leinster in the semi-finals of the Champions Cup and final of the Pro14 in 2017-18 and that has become a dog-eared script for both Beirne and Munster.

“To come here and lose another few semi-finals, it is quite frustrating,” he admits, for there was also a Champions Cup semi-final defeat by Saracens as well as back-to-back losses against Leinster in the Pro14. “But each year everyone starts on zero, as they say, in the league and there’s another opportunity to win, so there is excitement too,” says Beirne, who maintains Munster are “getting better and better and we’re certainly close.”

Beirne’s career trajectory was cruelly interrupted by that fractured ankle he suffered away to Saracens last December, adding to a pelvic issue he had from the World Cup and which was compounded by a leg injury in training. He was sidelined for eight months before an eventful return against Connacht (yellow carded, scored a try and man of the match) and the semi-final against Leinster.

Beirne’s versatility and RG Snyman’s injury could see him employed in both the second-row and back-row by Munster, and with the next phase of his career looming, Beirne still has plenty to achieve and, he reckons, time to do so.

“I suppose I’m still 28 so there’s a lot of lads who play on until they’re 35 and you look at some lads there going into a European final, they’re still 35, 36-year-olds going in there so it’s never too late to win silverware.”

“You can never not be ambitious and I wanna keep going for as long as I can keep going, and right now my goal is to win some silverware with Munster and keep pushing to get into the Irish squad, and into a jersey there and hopefully win silverware there as well.”

“But right now, with this week that’s coming, I have to play for Munster and prove myself here and then put in a good performance that might in the long run put my hand up for Andy Farrell’s plans.”