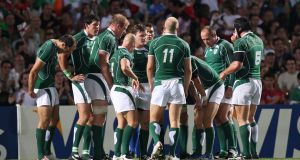 The Ireland team regroup after Georgia score during the 2007 World Cup in Bordeaux. Photograph: Billy Stickland/Inpho

“Three beers a piece for each of my co-workers,” requested Andy Dufresne despite being held on the edge of the roof of Shawshank prison by Chief Hadley.

“A man working outdoors feels more like a man if he can have a bottle of suds.”

Comparisons to 2007 are premature as Ireland didn’t fall apart until the warm-up games, and by the pool stages of that World Cup it was too late to recover.

One parallel might be fatigue; mentally, physically or both. We trained ourselves to a standstill in Bordeaux. Georgia almost beat us so we doubled down on our efforts.

What transpired is consigned to record, forever.

The current Ireland team have already carved their own piece of historic achievements. In between beating the All Blacks, a rare Grand Slam was completed.

They remain on the same journey.

Solutions to a drop in form are never easy, so now is when the coaches must come into their own. Because player effort has been incredible.

Maybe, just maybe, everyone needs to come up for air.

Back in the day – sorry, but it’s what I know best – gruelling fitness sessions were in the vanguard of Michael Cheika’s mission to guide Leinster to Heineken Cup glory.

I remember morale was particularly low as we booted and suited for one of these torture sessions. Imagine the joy on 40-odd faces when greeted by an empty back pitch in UCD where, stacked high, was the wonderful sight of midweek, midday beers.

Like those fictitious inmates forced to tar roof under a blazing sun, we found ourselves slouching on the grass sipping suds “courtesy of the hardest screw that ever walked Shawshank prison”.

We momentarily ceased to be team-mates, just a circle of men chewing the fat, and all our troubles melting away.

It’s not that simple for the Irish squad. They can’t go drinking together in town. That’s not what I am saying, although I read the English went out in Portugal the Tuesday before winning in Dublin and you can bet the mortgage Warren Gatland let the Welsh boys loose after his latest coaching masterclass.

Point is, professional sport gets awfully serious in the bubble.

Dan Leavy, James Ryan, Devin Toner, Rob Kearney, Cian Healy, Rory Best and Bundee Aki were ever present and on song. That’s no longer the case as chopping and changing was needed with an eye on the World Cup and injuries visited the squad, particularly at lock.

So, Ireland discovered that they cannot have their cake and eat it. A natural and essential pecking order is more obvious than ever before.

The dip in performance is accentuated by key individuals being off colour. Again, we know why.

The basics – catching and throwing – have been worryingly poor with collective body language betraying deeper frustrations. There were three unforced errors in the opening passages of play last Sunday in Rome. The lineout malfunctioned, Seánie O’Brien’s pass to Conor Murray went to ground and on it went.

Confidence is low. The players will take responsibility for this. They cannot be faulted for endeavour, unlike France at Twickenham, but when they fail to spark the emphasis goes back on coaches to break this vicious cycle.

Joe Schmidt and Andy Farrell will presumably see wood through the trees. They will figure it out. Maybe less is more. Go have some fun.

I’ve no idea, to be honest. Who in their right mind would be a coach?

Wales are marching in the opposite direction. Gutsy win in Paris, unimpressively solid against Italy, they struggled to cope with English power in the first half of Saturday’s instant classic.

Watching Wales’ killer score I felt happiness that Gary Ella shifted my 1.8 metre frame to midfield in 2003. Biggar’s cross-kick gave Elliot Daly a horrible feeling in his gut, as he was forced to back pedal, presumably seeing the taller shadow of Adams looming overhead.

I could see Daly wouldn’t be able to get off the ground, so the best way to defend that dropping ball was to let Adams land, hook his arm and pray the cavalry arrived.

Ireland would love a cut at England next week, with Rob Kearney at fullback, but France and Wales will suffice. The fear of losing three games in this tournament is real.

Managing players back to form, while risky, has become necessary if this Six Nations is to avoid being filed alongside 2008 and 2016. Both were post World Cup when Ireland couldn’t get their groove back after disappointing tournaments.

Confidence is a fickle friend. That’s why athletes keep preparation so narrow, following the process, the small picture. When the processes are unravelling your belief evaporates.

That’s when you’re in real trouble. Ireland are not there yet. Fear can hold you prisoner. Hope can set you free.

I know all about crises of confidence. I was cut from the ’03 World Cup squad at the 11th hour in some part due to deserved criticism from senior players. I had a handful of training sessions and warm-ups to change Eddie O’Sullivan’s mind but hearing the whispers, and instead of using such warnings as motivation, I let them consume my thoughts to such an extent that I became obsessed with not dropping the ball. When you reach that moment in your own head the chances of skinning your opposite man significantly decrease. You also tend to spill the pill.

Back to Leinster I went, tail between legs, but the change of scenery proved ideal. Something special happened in this safe environment; I was given the keys to the kingdom at fullback. We went on an eight-game winning run, I stopped thinking and started scoring tries. Then, a few months into the season, Ella saw wood through all the trees by suggesting I run at outside centre.

In a six-month stretch you can go from discarded provincial winger with a bad attitude – trapped in the Shawshank of your mind – to Six Nations player of the tournament cutting through midfields from Paris to Twickenham.

Everyone needs a little luck in order to shine.

Losing to England this month, in the manner it happened at the Aviva stadium, sucked the confidence out of Ireland. They have yet to recover. Remember these guys live from contract to contract. Some of them are playing for their very careers. When the collective stumbles it means several individuals are struggling, badly.

It’s very hard to turn it around inside the tournament. Maybe Ireland needed this to happen now. We hope so. Maybe they need to bin the 2019 Six Nations.

Ideally not. Ideally, the French will bring out a resilience we know they possess.

It comes back to Schmidt and Farrell. I expect their direction will put Ireland back on track. Consider both men’s experiences since 2015.

It will be collaborative with mildly disillusioned players needing to feed off the coach’s direction.

I’m not sure it’s possible for the squad to go drinking together anymore – like our Killiney Castle nights – so it could be something as simple as not training. A change of scene like this week’s trip to Belfast might do the trick.

The coaches will take the pulse of the group.

Cheika was great at that.

“We sat and drank with the sun on our shoulders and felt like free men,” said Red (Morgan Freeman). “Hell, we could have been tarring the roof of one of our own houses. We were the Lords of all creation.”

Actually, Cheika wasn’t Hadley, he was Andy “hunkered in the shade, a strange little smile on his face, watching us drink his beer,” forcing men to talk to each other about matters other than who did what wrong, where and when?

Maybe he did it so we’d feel normal again. If only for a short while.