Karma chameleon: Owen Farrell and the Zen of being Number 10

The Offload: Fans miss out on semi-finals on the telly; Leo Cullen cries foul over poaching 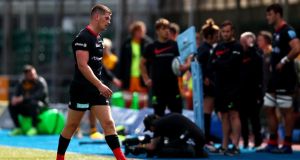 Owen Farrell of Saracens leaves the field of play after being sent off during the Gallagher Premiership Rugby match between Saracens and Wasps last Saturday. Photograph: Clive Rose/Getty Images

The outhalf’s existence really needs to be based on Zen principles. Get too pumped up and you may accidentally decapitate someone, which, as Owen Farrell fully understands, can lead to Saracens’ dream of retaining the Champions Cup ending at the hands of Buddha himself, Johnny Sexton.

“If only Owen Farrell had someone to coach him how to tackle when he was growing up,” was the most entertaining observation, by Brett Igoe, when Farrell appeared to ruin Sarries’ already-disastrous campaign with a forearm into Charlie Atkinson’s kisser.

The problem now for the England captain is his long history when it comes to such kamikaze tackles. He has got away with plenty of them.

“He will get a lengthy ban,” said Lawrence Dallaglio on BT Sport. “A lot of people on social media will say that’s karma. We know it’s been a problem with Owen in terms of his tackle height. He is going to miss [the Leinster match] and possibly even [the international window].”

The outhalf must embody a chill demeanour. Drifting out of their meditative state, even for a split second, and they will have a face like JJ Hanrahan’s as Munster’s season collapsed around his inability to go kick-for-kick with Sexton.

We imagine Ian Madigan’s heart kept its regular beat during those killer kicks to sink Edinburgh at Murrayfield.

“Ice in his veins,” Simon Zebo tweeted of his one-time fellow exile.

Now it becomes about finding a slot for Madigan in the Ulster team when his right boot is needed most, because Billy Burns looks the very definition of calmness at number 10.

Can we have our telly rugby back, please?

You can’t go to the game. You can’t see it on your telly. You can’t watch it in a pub without ordering food. And anyway, you are not supposed to be gathering in large groups. This has gone beyond a joke. Rugby desperately needs to streamline its broadcasting partners.

Eir Sport cleverly put Leinster versus Munster onto their Facebook page, but they opted against a similar route for the other Pro14 semi-final between Ulster and Edinburgh. Some people paid €10 to Now TV to watch the second semi-final, not realising that Premier Sports 1 is not available in the Republic of Ireland at the moment. Need to make that a bit more clear, lads.

Almost 300,000 households in Ireland did not have live access to these semi-finals due to the ongoing payment dispute between Eir Sport and Virgin Media, leading to both platforms removing their channels from the other.

That’s a lot of people turning their backs on Tommy Bowe and friends. At least TG4 are showing Saturday’s final live.

The ongoing media war is bad news for everyone involved, especially when it comes to commanding loyalty from an already disgruntled and understandably fickle audience. You’d imagine this would be a major concern for the Pro 14 – and their new commercial arm CVC – before they put their broadcast rights out for tender ahead of the 2021/22 season.

“Initially, you think: brilliant, because we’re finally aligned with the men. And then it takes a few seconds to realise the reality is that it’s the launch. I think probably for people involved in Irish rugby it was maybe the final straw in relation to women’s sport, generally, and women in the workplace.”

Leo left in the lurch as Munster tap up Salanoa

If you think the on-field rivalry between Munster and Leinster has been diluted by Munster’s failure to recreate the Springbok blueprint, fear not, because off-field relations sound more toxic than they have ever been.

A season doesn’t seem to pass anymore without Leo Cullen crying foul over one of the other provinces successfully tapping up a player the Leinster supremo most certainly does not want to lose.

Joey Carbery caused all sorts of hassle, especially the manner in which Cullen was approached by David Nucifora and Joe Schmidt, leading up to a season-defining game, in an attempt to redirect Carbery or Ross Byrne to Belfast.

It made sense for Carbery to escape Johnny Sexton’s shadow and sign for Munster, but the Roman Salanoa situation – especially when Cullen highlights it on the eve of the Pro14 semi-final – told us plenty about how disgusted Leinster were to lose the Hawaiian tighthead prop that they had sourced and nurtured.

“Roman told me he was going to stay,” said Cullen last Friday after Leinster were forced to sign former Munster player Ciaran Parker as tighthead cover. “I basically took him at his word but he hadn’t actually signed the contract.

“I don’t know what sort of pressure he was under in the background, but he left us compromised.”

Sounds like the IRFU need to sort this out before growing animosity gets out of hand.

Eventually there may need to be a formal draft for the other three provinces, with the weakest squad getting the best Leinster teenagers on show during the schools cup at Donnybrook. We could go wild and televise it live on Eir or Virgin or whoever promises to let people see it.