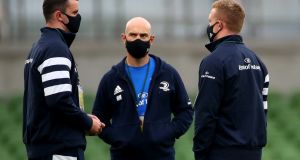 Leinster and Ireland secondrow James Ryan is expected to be available for selection for the Pro14 final on Saturday at the Aviva Stadium.

Ryan has not played since rugby’s return, having suffered a shoulder injury in training which required a procedure to address the issue. His return for the Pro14 decider against Ulster is ahead of schedule, and a major boost for Leo Cullen’s team. They also face reigning champions Saracens in the Champions Cup quarter final on Saturday week.

Irish head coach Andy Farrell will too be delighted with the news ahead of next month’s Six Nations resumption.

Jordan Larmour was removed for a head injury assessment in the second half of Friday night’s semi-final win against Munster, he will continue to follow the graduated return to play protocols.

Neither Tadhg Furlong or Dan Leavy have featured post-lockdown, but Leinster have yet to rule them out of contention for the Ulster match.

Furlong will be further reviewed this week following his return from a back injury, as will Leavy who is returning from a serious knee injury.

Fergus McFadden is unavailable for selection this weekend but will look to increase his training load further as he steps up his rehabilitation from a calf injury. Dave Kearney (hamstring), Conor O’Brien (hamstring), Adam Byrne (hamstring) and Vakh Abdaladze (back) also remain sidelined.