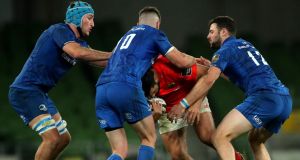 Munster’s Damian de Allende is tackled by Will Connors, Johnny Sexton and Robbie Henshaw of Leinster during the Guinness Pro 14 semi-final at the Aviva Stadium. Photograph: James Crombie/Inpho

In November last year Munster hosted Racing 92 in the Heineken Champions Cup. Despite it being only the second game under a revamped coaching ticket for the majority of their World Cup contingent, and the first for several of them, Munster embraced a high risk, high wire brand of rugby which seemed to herald a new dawn under the influence of Stephen Larkham.

JJ Hanrahan took the ball to the line, traded line breaks with Finn Russell, enacted clever strike plays and probed the blindside as the Munster backs used the full width of the pitch. They kicked less and both passed and offloaded more in an entertaining 21-all draw.

Watching their comparative lack of ambition and width against Leinster last Friday – despite Johann van Graan, Stephen Larkham and Graham Rowntree having a full pre-season as such with the entire squad – was hard to fathom.

Aside from box-kicking there seemed to be, as Peter Stringer observed afterwards, little in the way of a Plan B. They never got their big ball carriers into the game, rarely built phases save for one occasion before Hanrahan grubbered the ball away, and hardly ever reached the edges.

Consider this: their outside backs received four passes in the entire match, and none of them were good ones, with Andrew Conway having to retrieve a loose ball off the deck behind him. Keith Earls received one pass all night, when coming across from his wing.

At some point they were going to have to score a try, and they never looked like doing so until the game was virtually over

Of course, the opposition had a big part to play in this. Munster had nine set-pieces inside or just outside the Leinster 22, compared to the latter’s three, but struggled to win their normally secure lineout platform as Leinster disrupted or took the Munster throw on five occasions.

When Munster did try to generate some tempo, Leinster chop tackled them to death, none more effectively than Will Connors. His man-marking job on CJ Stander ensured the Munster ‘8’ has rarely had such a negligible impact and the thought occurred that the Leinster think tank already have Connors in mind for both Marcell Coetzee next Saturday and Billy Vunipola a fortnight hence akin to Ireland chop tackling the Saracens ‘8’ out of the game in Dublin three seasons ago.

The heavy downpour 10 minutes before kick-off last Friday was also a factor, ensuring a greasy pill for the entire match. Munster might also legitimately point out that their dozen box kicks (11 by Conor Murray and one by Craig Casey) were only one more than Luke McGrath (six) and Jamison Gibson-Park (five) combined and that they led, indirectly, to the two penalties Hanrahan missed as well as another one that was overturned. Any one of those might have made the score 10-6. But at some point they were going to have to score a try, and they never looked like doing so until the game was virtually over.

A key difference was that eight of Munster’s box kicks were from the middle third of the pitch. This approach, even from inside Leinster’s half, inexplicably continued in the last 10 minutes after Casey replaced Murray and Munster needed at least two scores, including a converted try, just to draw level.

Furthermore, conditions were the same for Leinster, but whereas Munster only attacked three times from the middle third of the pitch, Leinster did so on seven occasions. By contrast, their back three players received eight passes and Leinster were altogether more efficient in working the ball to the edges.

Although far from their best, Leinster were also more ruthless inside the opposition 22, notably in again splintering the Munster pack for another maul try. Yet nothing encapsulated the contrast in the two teams than the build-up to that score.

From a scrum inside their own 10-metre line, Johnny Sexton ran around his centres and brought Hugo Keenan in off his wing, Leinster carrying 20 metres-plus beyond the gainline by subsequently working the ball wide to Robbie Henshaw on the left and then the outstanding Caelan Doris (who carried for comfortably more metres, 52, than the entire Munster pack combined) up the middle.

Whereas Munster would have trucked it and then opted for another telegraphed box kick off second phase, the masterful Sexton, another key difference between the sides, then put that telling diagonal kick in behind Earls.

Such attacks were seemingly beyond Munster’s remit. For all the work Larkham and the Munster players have done in broadening their running game, Leinster came harder onto the ball and ran straighter lines, thereby creating more space out wide. Their forwards also provided more subtlety and variations, as when Luke McGrath worked a wrap with Scott Fardy or Connors pulled the ball back for Sexton.

What made Munster’s approach all the more puzzling was that they had scored three tries against Leinster through Andrew Conway and Earls two weeks previously, and Munster’s intense warm-up drills suggested more of the same. Did the pre-match downpour prompt a change in tactics?

Afterwards, Van Graan maintained he was far less disappointed than he had been after the semi-final defeat by Leinster last season. Yet if anything it seemed that Munster were a good deal more threatening two seasons ago, when attacking from deep with the last play of the game in a one-point defeat, or indeed last season, than they were last Friday night.

This was Munster’s 10th semi-final defeat in both competitions, along with one in the Pro 12 final three seasons ago, since they last lifted silverware. To their eternal credit they keep dusting themselves off and coming back for more when lesser teams wouldn’t. And there’s no disgrace in losing to Leinster who, after all, have won their last 24 matches.

Afterwards, Stander maintained there was nothing demoralising about this sequence of defeats and that they will return as hungry as ever in four weeks’ time. But for him and the others who’ve been trying for years – the likes of Peter O’Mahony, Murray and Earls – it must be a little dispiriting.

Had Ulster come up short away to Edinburgh – had, say, Ian Madigan missed those last two kicks – they could at least have consoled themselves that they’d had a go.

There was no such consolation for Munster.