Van Graan has eye on Europe as Munster face Cardiff 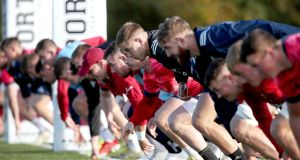 Munster players in training ahead of their Pro14 clash with Cardiff Blues. Photo: Bryan Keane/Inpho

The scheming and planning for the Heineken Cup has started as Johann van Graan makes wholesale changes for Munster’s Pro14 trip to Cardiff on Saturday evening.

With next weekend’s interpro derby against Ulster the last warm-up ahead of Europe, we’re likely to see several of their Ireland internationals return to action there. Consequently Van Graan has opted to test the talents of his extended squad by making 11 changes from last week’s bonus-point win over Ospreys, who are also their first European opponents in a fortnight’s time.

Munster’s biggest defeat of the season came in the corresponding fixture last year when a well stocked side were hammered 37-13 at the Arms Park. One of four to retain his place from last week, Dan Goggin, says they are expecting to be severely tested in defence once again.

“That’s a game that we target every single year and the last couple of years we haven’t come away with a win over there,” said Goggin, who is named alongside Sam Arnold at centre for the first time this season.

“Conditions are always tough over there and they’ve got serious attacking force in the back. You know Rey Lee-Lo and Willis Halaholo will be dangerous so we are going to prepare as best we can for that game and do our best to come away with the points.”

As well as Goggin, Jack O’Donoghue starts again for Munster and will captain the side for the second time, and elsewhere Calvin Nash and Shane Daly are also retained. Arnold and Alex Wootton will start for the first time this season, while Conor Oliver could also make his seasonal debut from the bench. South African native Keynan Knox makes his first Munster start at tighthead.

Centres Lee-Lo and Halaholo were the chief destroyers in both meetings of the sides last season, and while Lee-Lo make his first start since representing Samoa at the World Cup, Halaholo is held in reserve for John Mulvihill’s side.