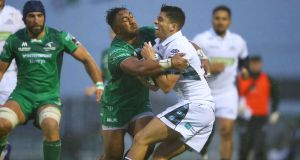 Dave Rennie got one over on his former Chiefs assistant Kieran Keane as Glasgow Warriors outgunned Connacht for a 18-12 Guinness Pro14 win at the Sportsground.

It was a classic case of the team making the fewer mistakes ultimately getting the rewards, with Glasgow’s well-taken second half tries from Ali Price and Lee Jones brightening up a miserably wet and windy night.

Connacht were held try-less on Keane’s coaching debut in the Pro14, outhalf Jack Carty’s trio of penalties giving them a 9-3 lead after playing with a first-half wind advantage. However, Peter Horne landed his second penalty for Glasgow before teeing up Price’s try.

And Jones’ try — in response to another Carty kick — ensured a winning start for new Glasgow boss Rennie.

This meeting of the 2016 and 2015 league champions saw former Chiefs coaches Keane and Rennie take charge of their new teams for the first time. With the elements behind them, Connacht took a first-minute lead thanks to Carty’s opening penalty goal.

However, Connacht’s set-piece game was sloppy, they lost their first lineout and conceded a free-kick and successive penalties at scrum time. The wind thwarted Horne’s first attempt off the tee, but barely a minute later he kicked Glasgow level from close range.

Connacht rebounded in impressive fashion and really should have had a try by the end of the first quarter. Debutant flanker Jarrad Butler lunged for the base of the left post but it was ruled inconclusive by TMO Peter Fitzgibbon. Glasgow absorbed further pressure before a straightforward 19th-minute penalty from Carty restored the hosts’ lead.

Individual mistakes ruined promising attacks for both sides, as Glasgow were caught for accidental offside and Connacht captain John Muldoon and Ultan Dillane both knocked on in lineouts. Amid some error-strewn passages, Bundee Aki managed to draw in two defenders and release Cian Kelleher for a kick chase out wide in a rare moment of attacking quality.

Although the wind turned two attempted clearances from scrum-half Price into mauling opportunities for Connacht, Glasgow’s well-organised and pacy defence — with man of the match Adam Ashe putting in some big hits — continued to frustrate the hosts until Carty swept over from a late penalty for 9-3 half-time scoreline.

The Scots quickly cancelled out that score when play resumed, Horne punishing Denis Buckley for not retreating the required distance at a quickly-taken penalty. The Glasgow stand-off then conjured up the game’s first try, a training ground move off a scrum seeing him open up the Connacht midfield and then link with his half-back partner Price for a classy seven-pointer.

Replacement Tom Farrell’s man-and-ball tackle on Ruaridh Jackson sparked some better execution out of Connacht and a crisp penalty strike from Carty on the hour mark made it a one-point game — 13-12.

Keane’s charges edged up the pitch thanks to a series of penalties, with the energetic Sean O’Brien making his presence felt off the bench. Frustratingly, their hard work was undone by some lacklustre lineout work and knock-ons from Darragh Leader and Matt Healy.

Glasgow were coping much better with the slippery ball — and they were at their clinical best when Price’s cross-field kick was collected by Italian replacement Leonardo Sarto who evaded Leader and passed out of a tackle for the onrushing Jones to score in the left corner.

Horne missed the difficult conversion, but it was not needed as Connacht, with their error count increasing, failed to respond.