Leinster secure away bonus as Dragons put to sword 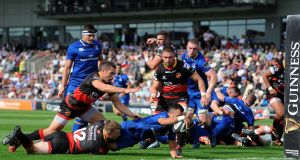 Leinster’s Jamison Gibson-Park stretches over to scores his side’s first try in the Guinness pro 14 game against the Dragons at Rodney Parade. Photograph: Ashley Crowden/Inpho/Camerasport

This victory saw Leinster’s forward pack to the fore and they were too much for Bernard Jackman’s men when push came to shove up front.

Dragons were awarded a penalty try of their own and Gavin Henson kicked three penalties, but it wasn’t enough.

After their disappointing semi-final loss to eventual winners Scarlets last season, Leinster are determined to right a few wrongs this campaign.

This was a deserved victory, but one which only materialised after a quiet start. Henson’s penalty put the Dragons ahead, Byrne then replying with three points of his own.

The home side, under the guidance of former Leinster hooker Jackman, are at the start of a new era following their summer takeover by the Welsh Rugby Union.

And while the home side were all heart, it was Leinster who had the superior craft. Isa Nacewa produced a sublime break to then light up the game. The skipper was held up over the line, though Gibson-Park made amends from the resulting scrum by making his way to the line.

Byrne converted and then swapped penalties with Henson to make it 13-6 at the break.

The start of the second period saw Leinster stamp their mark of their game as their international tight five stood up to be counted.

First, a wave of blue from a driving lineout was hauled down illegally by the Dragons, leaving Mike Adamson to award a penalty try which was converted automatically.

Home lock Matthew Screech was yellow carded for his part in the score to leave the Dragons up against it.

Five minutes later, Larmour was given a simple finish after his forwards had bashed their way to the line inside him. Byrne missed the kick, but Leinster were now 25-9 up with Henson again on target.

Cullen rang the changes to keep his team fresh and with the Dragons not helped by losing replacement scrumhalf Tavis Knoyle to injury, Leinster quickly added further pain.

Leavy crossed close to the posts for the bonus-point score and Byrne converted.

The Dragons still refused to go away and when Ashton Hewitt tore down the left wing and was tackled high by Adam Byrne, the young back was yellow carded and Adamson awarded a penalty try which was improved on automatically.

That looked like being the final score, but there was still time for Leinster to have the final say. Replacement Marsh came up from a pile of bodies with the ball and then placed it on the tee to convert his own try.