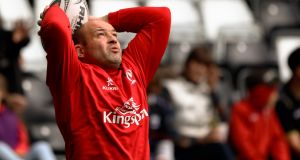 Ulster director of rugby Les Kiss has announced that Rory Best has been reinstated as the province’s captain for the 2017/18 season.

Best, who has played 198 times for his home province, returns to a position that he first held from 2007 to 2011. Last season Andrew Trimble and Rob Herring shared the captaincy.

The 35-year-old brings immense experience to the role, having previously had two stints as captain of Ulster, as well as considerable experience of leading both Ireland and the British & Irish Lions.

Best took over the Ireland captaincy 18 months ago and oversaw a historic run of results last year as they registered a first Test victory on South African soil in June followed by a first-ever win over New Zealand in November. Later that month, he won his 100th international cap in a win over Australia.

A two-time British & Irish Lions tourist, Best led midweek sides on both the 2013 tour to Australia and again in New Zealand earlier this summer.

Commenting on his appointment, Best said:

“It’s a huge honour to captain my home province again. To play for Ulster fills me with immense pride and that feeling is amplified when I lead the team out.

“I’ll be in the privileged position of having an experienced group of players supporting me, all of whom have represented Ulster for a number of years and are superb leaders in their own right.

“The standard of rugby in the Pro14 and the Champions Cup is improving each year and the players are looking forward to the challenges ahead in both competitions. We’re committed to working hard each week to improve every aspect of our game and hopefully this will increase our chances of success.”

“Rory is an exceptional ambassador for Ulster both on and off the pitch. To have achieved what he has in the game is testament to his qualities as a player and a person.

“It’s brilliant for us to be in a position to call upon someone with his experience and proven leadership ability. He has recent experience of captaining Ireland and the Lions in massive games and that has further enhanced his leadership qualities, meaning he’s better equipped than ever before to lead us.

“We have a structure in place that will enable us to call upon strong leaders throughout the season, regardless of injuries and international call-ups. Indeed, Chris Henry, who has led the team on many occasions, will captain us on Friday evening against the Cheetahs. I’m looking forward to working with Rory and the other senior players to create a culture that challenges us to improve week by week.”