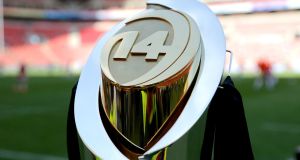 No South African teams will take part in the first 11 rounds of the new Pro14 season. File photograph: Inpho

Pro14 organisers and the South African Rugby Union are in early discussions about potentially expanding the tournament to include more South African franchises from 2021.

Back in August it was confirmed that under current international travel restrictions it would not be possible for South African teams to fulfil Pro14 fixtures until 2021. The first 11 rounds of the new season, taking the tournament up to early January, will not feature any South African teams.

In a statement released on Wednesday morning, Pro14 Rugby explained: “SA Rugby’s long-standing commitments are to field two teams in the Pro14 and in light of the withdrawal of the Southern Kings, discussions are on-going about fulfilling this agreement from 2021 using a replacement team from its current professional franchises.

“Additionally, both Pro14 Rugby and SA Rugby are in early discussions about potentially expanding the tournament and deepening our partnership to include more South African franchises from 2021.”

The competitiveness of the competition has been questioned in recent weeks, after Leinster beat Ulster in the final with several key players rested, and a week later were beaten by Saracens in the Champions Cup quarter-final. Ending a run of 25 matches unbeaten, and more often than not untested.

Pro14 organisers also welcomed the news that the South African Rugby Union (SA Rugby) has been able to arrange a domestic schedule for its professional teams, “the first step in the return of their teams to on-field action”.

South Africa’s domestic season will finally kick into full gear when a seven-team competition starts on October 10th, ending a seven-month hiatus due to the Covid-19 pandemic.

The country’s four Super Rugby sides, Bulls, Lions, Sharks and Stormers will take part, along with Pro14 outfit the Cheetahs, and local provincial teams the Pumas and Griquas. Teams will play each other home and away, with the top four in the table advancing to the semi-finals.

Earlier this month the Southern Kings were put into voluntary liquidation, having already suspended all rugby activity for the remainder of 2020.