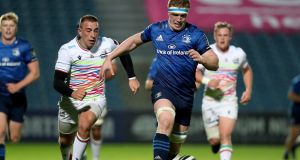 Dan Leavy in action on his Leinster return against Zebre during the Guinness Pro 14 game against Zebre at the RDS. Photograph: Dan Sheridan/Inpho

Dan Leavy had to make do with a few slaps and pats from team-mates rather than the roar of approbation that would have greeted his return to a pitch if there had been any supporters at the RDS. He seemed delighted to be back, immediately barking orders and organising when summoned from the bench on 51 minutes.

His last competitive game was a Champions Cup quarter-final against Ulster when he suffered a horrific knee injury; those 19 months must have seemed an eternity but if there were any gremlins of doubt or concern, he didn’t betray them, at one point taking a thumping tackle as he got a pass away in the build-up to a try.

He didn’t take too much out of the ball and made a couple of good reads in defence. He might even have had a try but Joy Neville reviewed the footage and ruled out what would have been a sentimental postscript to his return.

Leinster played some cracking rugby against a patently overmatched Zebre, scored nine tries with Harry Byrne flawless in his place-kicking; his general game on the front foot was largely excellent too. The home side had four players on debut: hooker Dan Sheehan crossed for two tries, Liam Turner had a fine game, Ciarán Parker also dotted down while Michael Silvester also won a first cap.

Devin Toner making his 250th appearance caught the kickoff and Leinster were smoothly into their stride but unfortunately Ian Nagle, returning to the province from which he left for Italy, got his head caught on the wrong side in a tackle and his night ended after a minute.

Luke McGrath was sharp on the fringes but the odd handling error initially scuppered Leinster’s enterprise. The outstanding Rhys Ruddock and Ross Molony provided Leinster were several positive gainlines based on muscular carrying while Josh Murphy and Scott Penny were rewarded for top-class performances with a try apiece, while another standout performer Tommy O’Brien weighed in with a brace.

Leinster took the lead on 12 minutes, McGrath and Ruddock with important contributions following a lineout maul before Michael Bent was propelled over the line from close range, a slingshot effect. Byrne added the conversion.

Seven minutes later Sheehan was the quickest to react, when a Zebre lineout went askew, the tail-gunner grabbing the ball and powering through a tackle to celebrate his debut with a try. Byrne’s conversion kept the scoreboard ticking away.

The field position had arisen following a great kick from Jimmy O’Brien, maintaining his high quality input from the opening whistle. He may be an outhalf or centre by inclination but he’s a polished footballer on instinct and looked comfortable in the fullback role.

Leinster eased further ahead with a superb strike play from a lineout, Sheehan took the ball around the tail, slipped an inside pass to Dave Kearney and the wing powered through a tackle; Byrne racked up his third conversion and at 21-3 the home side were coasting.

The fourth try and with it a bonus point was provided by Tommy O’Brien, the right wing’s perfect timing onto an inside pass allowed him an unencumbered run to the line. Byrne tagged on the conversion and at 28-3, the most pertinent question was whether would retain their focus through to the final whistle.

The bad news for the visitors was that Leinster continued in the same vein after the interval, slick approach play culminated with Sheehan’s second try, the hooker plunging over from a metre. Byrne would have been given style marks for his conversion, which he drew in nicely from outside the right-hand post.

Leavy’s arrival along with James Tracy, another debutant Parker and Michael Milne provided Leinster with fresh energy and that was the precursor to another try, this time for Murphy, a fitting recompense for his work-rate. It was turning out to be a good night for the ‘newbies,’ excellent work from Tommy O’Brien and a superb line from Parker saw the replacement prop cross for a try as did Tommy O’Brien, his second and Penny late on.