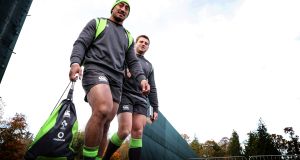 Bundee Aki: has given outstanding servant to both Connacht and Ireland. Photograph: Billy Stickland/Inpho

At some point this afternoon, Jamison Gibson-Park will most likely make his Irish debut. Next month, his fellow New Zealand-born Leinster team-mate James Lowe will follow suit, no doubt reigniting that hoary old chestnut regarding the residency ruling.

Recall, after all, the furore which greeted Jean Kleyn being fast-tracked into Ireland’s World Cup squad last year. Yet it’s worth keeping some perspective here. For starters, Kleyn was the only player who qualified by this means to win his first cap for Ireland in the 2019/20 season.

Presuming Gibson-Park becomes the first under Andy Farrell as one of four debutants today, the scrumhalf will be only the tenth player to represent Ireland through residency, out of the 109 players used in total, since the start of the Joe Schmidt era in 2013.

Put another way, of the 1, 737 caps awarded so far since Schmidt’s first game up until today, only 134 have been earned by players who’ve qualified through the residency ruling, which is less than 8 per cent.

As can be seen from the list attached, some of these players have undoubtedly been the stand-out players in their position. In fact Aki, Stander and Jared Payne account for the bulk (63 per cent) of the caps earned by residency players over this period.

Such has been the widespread criticism of the rule that World Rugby changed its Regulation 8 to extend the qualification period from three to five years. This was to come into effect on January 1st, 2021, but due to the coronavirus pandemic, the game’s governing body have put this back by a year.

This will immediately benefit Edinburgh’s South African-born prop Pierre Schoeman, who will be able to represent Scotland next year rather than in 2023.

But some countries are liable to benefit more than others, such as France and Japan, given the greater preponderance of foreign players in their professional leagues. Furthermore, the five-year qualification period will not deter some of the wealthier Tier One countries from simply recruiting players from elsewhere, especially the Pacific Island countries, from a younger age.

The players themselves are not to blame for these rules. It’s also quite a commitment to up sticks and make a new life abroad. Three years is still a sizeable chunk of a professional player’s career as, most certainly, is a five-year qualification period.

Very often, their value goes well beyond the number of caps they win too.

Stander is now in his eighth season with Munster and Aki, an inspirational figure for aspiring young players in Connacht, is in his seventh with the province.

The IRFU have undoubtedly targeted “special projects” such as Stander, Aki, Lowe and others, and Farrell would be silly not to select them. Besides, as the Cranberries put it: Everyone else is doing it so why can’t we?

Of the Scottish 23 who faced Ireland at the Aviva Stadium last February, ten were born outside the country, including three through residency, along with five who had a Scottish grandparent. Furthermore, five of the ten are playing in the Premiership.

Of the Welsh 23 who lined up at the Aviva last February, six were born abroad, but no-one can dispute the “Welshness” of Toby Faletau, who has grown up in Wales since the age of seven, nor the English-born Ross Moriarty, whose father played for Wales. Their two residency-qualified players were the New Zealand-born pair of Hadleigh Parkes and Johnny McNicholl.

Similarly, England have Manu Tuilagi and the Tongan-born Vunipola brothers, Mako and Billy. Tuilagi has five brothers who played for his native Samoa, but he has lived in England since he was 12. The Vunipolas, initially brought up in Wales, have been living in England since their schooldays.

The contrast is more acute when one compares the Japanese team which beat Ireland at last year’s World Cup. Of the 23 involved, 11 qualified through residency.

Some, such as Michael Leitch, who was schooled in Japan from the age of 15, or Isiteli Nakajima, who went to university in Japan, certainly served their time as residents. The remainder were lured to the country as professional rugby players; not too many Japanese were complaining that day. Ditto when beating South Africa in Brighton four years beforehand.

However, the more you dig into this subject the more complex it becomes. How, for starters, could anyone begrudge Ian McKinley representing Italy after rebuilding his life in that country?

This can be a very emotive subject, and it’s very easy to be hyper critical of what is undoubtedly a rich man’s rule.

Coupled with this is the way players from Fiji, Tonga and Samoa move abroad and are effectively prevented from playing for their countries, notably by French clubs. By rights, World Rugby should make these clubs toe the line, and also make an exemption for the Pacific Island players capped elsewhere to subsequently represent Fiji, Tonga and Samoa.

While it’s also true that the Australian and New Zealand sides are well populated by players from the Pacific Islands, there are myriad socio-economic factors at work too. For young Pacific Islands players, playing abroad means they can financially look after their families back home, and more often than not they grow up dreaming of playing for the All Blacks or Wallabies.

For example, 11 of Australia’s World Cup squad, technically speaking, qualified by dint of the residency ruling, including half a dozen who were born in Tonga or Fiji. But in every instance, whether it was the Zimbabwean-born David Pocock who moved to Australia when he was 14, or the Fijian-born centre Tevita Kuridrani, whose family moved there when he was 16, no-one could dispute their Aussieness.

Indeed the worldly Michael Cheika, of Lebanese parents, made a point of the squad celebrating their multicultural background, thereby reflecting a modern-day Australia as a welcoming country.

The world is an increasingly small place – or at any rate it was until this year – and diversity in international teams should also be celebrated.