Italy have handed a debut to outhalf Paolo Garbisi in a younger, remodelled team 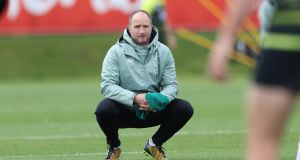 The sense of anticipation after an eight-month interlude since Ireland last played has been heightened by the presence of four uncapped players in the match-day squad.

Ireland’s attack coach, Mike Catt, also believes the debutants are there on merit and can drive the team’s energy and enthusiasm come the 3.30pm kick-off on Saturday.

“All of them have settled in very well, in an environment where they can come in and be themselves. Andy’s (Andy Farrell) very much created that and really drives that side of it. All the players are there on form.”

Of the 24-year-old winger Hugo Keenan, Catt said: “Hugo has this unselfish want to chase the ball; his kick-chase. He’s unbelievably quick, unbelievably fit, and he’s settled in very, very well. So I see huge things for him. He’s got a huge future.”

Jamison-Gibson Park, the back-up scrumhalf, is set to make his debut over four years after landing with Leinster, and Catt ventured: “I’m very excited about ‘Jabber’ as well, with the way we want to play at nine. He’s exceptionally quick to every breakdown, and he gets the ball away and gives us the width on the pass as well.”

Will Connors, another 24-year-old who has travelled a very similar journey to Keenan, and replacement prop Ed Byrne are also set to make their test debuts.

“Will (Connors) and Ed (Byrne) have obviously played very well for Leinster,” said Catt. “Will’s been that amazing chop tackler that has given blokes around him the opportunity to get on that ball, and again his work-rate is relentless.

“So for us these young guys coming in, these first cappers, these are the ones that are going to drive this team as well.”

Connors, and Keenan, developed their impressive work-rate on the sevens circuit, but Catt believes there’s more to be seen from the 23-year-old Leinster flanker’s attacking game.

“I think Will’s very underrated in terms of his handling ability. It’s never really been used with the Leinster way. Again he’s exceptionally quick into breakdowns, not just defensively, attacking-wise too.

“He’s got a real understanding of the game. He’s a good ball carrier who generates quick ball pretty much every time he carries, with his low steps and his drive through the tackle.

“We don’t just see him as a chop tackler, we see him as he fits into the way we want the game to be played. And he’s been exceptional for Leinster at that.”

Another significant difference in the team’s attack is Jacob Stockdale’s first test out at fullback after 28 caps on the wing.

The Italian head coach, Franco Smith, has handed a debut to outhalf Paolo Garbisi in a younger, remodelled team. The 20-year-old playmaker has enjoyed a meteoric rise after joining Benetton initially as a permit player from Petrarca Padova in June, starting in both of their opening Pro14 outings against Ulster, scoring a try in a 14-point haul, and Leinster.

Garbisi will play outside Marcello Violi, who is set for his first Test cap in more than two years, but despite previously being Italy’s attack coach for three-and-a-half years, Catt admitted he’s seen very little of the new Azzurri outhalf.

“He’s looked exceptionally impressive, especially against Leinster a couple of weeks ago. He looks very composed in that environment. I know we’ve spoken about him over the past couple of years, but I’d never really seen him perform.

“He’s another huge left footer, so them having him at 10, (Carlo) Canna at 12 and (Jayden) Hayward as well, you’ve got your left and your right footed kickers which helps their exit strategy. So we’ve got to be aware of that.

“But I’ve loved how he’s attacked the line. He’s been aggressive when he attacks the line. He sees the space very quickly, so I think he’s going to be very good, given time.”

Edoardo Padovani replaces Matteo Minozzi on the wing in an otherwise unchanged backline from the team which lost against Scotland last February.

Up front, hooker Luca Bigi captains the side and will scrum down between props Danilo Fischetti and Giosue Zilocchi, while Marco Lazzaroni replaces the retired Alessandro Zanni. Looking at the Italian team as a whole, Catt said: “They’ve picked a big pack; their backrow is big. Jake Polledri has been playing exceptionally well for Gloucester.

“So generating quick ball, playing with the width they’ve always played with since Franco’s taken over, it’s very much a Cheetahs-style, wide-wide game. They’ve been very effective against some top teams. They’ve scored some brilliant tries against France playing that way, so it’s making sure that we understand how we need to defend that.

Smith could also name Maxime Mbanda on the bench just a couple of days after he was given the Knights of the Order of Merit of the Italian Republic medal for his endeavours during the early stages of the pandemic when he became an ambulance driver.

Catt comes across as an easy going fella off the pitch - Bundee Aki described him as a hard worker on the training pitch and good craic off it - and he was not remotely inclined to complain about life in a bubble.

“Listen we can sit here and moan but really we’re in a very privileged position to be able to get out here and work and ply our trade. The bubble, it is what it is, it’s what we have to do to get ourselves ready to perform and hopefully try to give a little bit of confidence to the rest of the country, and really drive our message and give something for people to smile about.

“It’s tough across the board, but believe me, we’re not moaning in camp. It’s been exceptionally well done. The players have been very disciplined in what they need to do to make sure that nothing goes wrong, so hopefully we can put on a performance for the nation tomorrow.”