Dan Leavy closing in on a return to full fitness 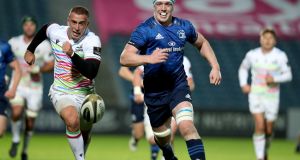 Dan Leavy in action against Zebre as a replacement during the recent Pro14 clash. He has still to line out for a full 80 minutes since suffering a serious injury. Photograph: Dan Sheridan/Inpho

Twenty minutes on a fast track in Glasgow and Dan Leavy took another stride forward for Leinster after the horror injury that ended his World Cup hopes last year.

While coach Felipe Contepomi says they are not holding Leavy back, it may take a little more time before the highly-rated flanker begins to start matches and go a full 80 minutes.

“It was a long, long injury and coming back you have to take baby steps,” said Contepomi. “For him it’s been a great achievement in terms of playing in the RDS but then on the astro down there in Glasgow, a different surface. You have to take all into account and he’s doing great. He looks good. Very happy for him and he’ll pick it up.”

Leavy’s injury occurred against Ulster in March 2019, when a body fell on his leg at an awkward angle with terrible consequences, badly injuring his anterior and posterior ligaments.

“Waiting another few weeks, it doesn’t do any harm. It puts him in a even better position to get to where he was or better. I think he’ll come stronger than he was before the injury. We are in a society where sometimes we don’t appreciate it and we are not patient . He’s working his way and I think he’s doing a great job. I can’t give an exact time but I think he’ll get there.”

Prop Tadhg Furlong is on the same trajectory after a calf injury.

“I think he is on the right track,” said Contepomi of Irish tighthead Furlong”With all of these things, with his back and so on, you don’t want to put a time [on it] because you don’t know, there could be a setback. Fortunately, for the moment, he is hitting all of the steps that the physios and the medical staff are giving him. He is going on track.”

Schumacher name gives me motivation every day, says Mick 16:46
Andy Farrell doesn’t know yet if he’ll be with Lions or Ireland this summer 15:46
Gordon Elliott hearing to start at 9.30am on Friday 13:45
Weary England’s batting woes continue as India take control 13:33
First 2023 Rugby World Cup tickets to go on sale on March 15th 12:58
Here is your handy guide to sport on television this week