Rugby Stats: French pair show the way when it comes to flair stakes 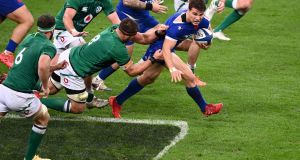 Antoine Dupont: the French scrumhalf offloaded 13 times, more than the Scottish, Irish and Italian halfbacks combined. He also made 245 metres – Conor Murray made 79 – comfortably ahead of his rivals. Photograph: Franck Fife/AFP/Getty

How do you define flair when appraising the recently completed Six Nations Championship? One comparable metric is to examine the contribution of the halfback pairings across a number of categories related to attack during the tournament.

The French axis of 23-year-old scrumhalf Antoine Dupont and 21-year-old outhalf Romain Ntamack drew widespread and deserved praise for the manner in which they orientated and discharged their team’s attacking patterns, a visual impression that is borne out by the figures.

Over the five matches, according to OptaJonny statistics, the French halfbacks combined ran for more metres (521), beat more defenders (28), made the most clean breaks (18) and offloads (14), while joint top in carries (95) and in second place in terms of try assists (seven). They also lead the way in “break passes” (eight). Ntamack played 313 minutes of 400, Dupont all bar 16 across the tournament.

The only category in which the Ireland halfbacks of Conor Murray and Johnny Sexton matched their French counterparts was in ‘try assists’ (seven). The Irish pair beat fewer defenders (10) across the five matches than any other starting pair in the tournament.

Dupont – this time using the official AWS Six Nations stats – on a personal level offloaded 13 times, more than the Scottish, Irish and Italian halfbacks combined. He also made 245 metres – Murray made 79 – comfortably ahead of his rivals but the Irish scrumhalf racked up as many try assists (three) as his French counterpart.

Ntamack scored three tries and had four try assists compared to Sexton’s two and one respectively while they were each down for one offload apiece. The Ireland captain broke more tackles and carried the ball more than the young French pivot.

The team dynamic, where and how they attack opponents, varies according to country and it should be noted that Ireland and France both scored 17 tries across the five matches while champions England registered 14.

Scotland, who finished level on points (14) with Ireland scored seven and conceded just five (the fewest in the tournament), one of which was in the Irish match when Sexton contributed all 19 points in a win for head coach Andy Farrell’s team in his first match in charge.

Ireland kicked the ball less (2,927 metres cumulatively) than the tournament’s great entertainers France (5,290), broke more tackles as a team (58), accumulated more turnovers (35) and conceded the fewest penalties (41) in the tournament; so there are aspects of the performances that are hugely positive from Farrell’s perspective.

The Irish coach must now decide what constitutes a successful Autumn Nations Cup, a four Test window. Ireland’s seeding for the 2023 World Cup, the draw for which takes place in December, is already confirmed so the results of the upcoming internationals will have no bearing on that process.

He should have a free pass to further develop playing principles while rigorously examining the depth of the playing roster ahead of the 2021 Six Nations Championship.

One area of the team, there were several, in which the spotlight has been trained following the disappointment of Paris is Ireland’s halfbacks, a rising din in some quarters, the substance of which seems to be that one or both should be replaced, based on age/form.

Sexton (35) and Murray (31) remain Ireland’s best halfbacks until proven otherwise and it would be irresponsible and basically wrong to discard them until there are superior options.

If Farrell wants to establish and appraise genuine contenders for the nine and 10 jerseys then the upcoming Nations Cup provides opportunities but it has to be from the start in the Wales and/or England matches.

The 25-year-old Ross Byrne, Sexton’s current understudy at Leinster and Ireland has eight caps for the national side with just one start, a World Cup warm-up game against England at Twickenham last year. Connacht’s Jack Carty (28) has 10 Irish caps, two in the run-on team against Wales in August 2019 and Japan at the World Cup later that year. A few minutes here and there isn’t going to prove their credentials or capacity to step up.

The same at scrumhalf, Farrell must decide whether Jamison Gibson Park, Kieran Marmion, John Cooney or Luke McGrath merit a start. Farrell can, if required, reach for the comfy blanket of Sexton and Murray from the bench. The Georgia game will provide a chance to look at two of Harry Byrne/Michael Lowry/Ben Healy at outhalf with Craig Casey and Caolin Blade leading the way at scrumhalf.

The Nations Cup is a platform for Ireland to examine short, medium and long term options in a meaningful, competitive environment.

TV View: No need to feel sorry for England, but if it was any other team 20:15
New GAA president delivers on gender promise in first committees 19:34
Man United and Chelsea play out another dour goalless draw 18:56
Former West Ham and Newcastle boss Glenn Roeder dies aged 65 18:01
Mourinho claims Gareth Bale is ‘better than ever’ 17:31
Crossword Get access to over 6,000 interactive crosswords