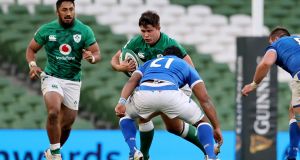 Ireland’s Dave Heffernan comes up against Maxime Mbanda of Italy during the Six Nations match at the Aviva Stadium. Photograph: Dan Sheridan/Inpho

Amid the feelgood stories from Ireland’s four debutants in the win over Italy, Dave Heffernan’s home debut over three years on from his first cap in the USA was right up there. It had been a long wait for the 29-year-old Connacht hooker in putting to rights one of the least memorable days of his career.

Heffernan has always had regrets about that half-hour in New Jersey’s Red Bull Arena in June 2017 when, by his own admission, nerves had the better of him and he was disappointed with how he performed. Last Saturday’s half-hour was altogether better, and was even capped off with a try.

“It was a relief. It had been a goal of mine to get back in for a long time. I was disappointed with how I did in my first cap, so it’s something I’ve been targeting for a long time. To get out there and give it a shot was massive.

“I made sure I enjoyed it a lot more than the first time around. I feel I’m in a better place now than I was then as a player; feel I can make more of an impact as a player. It was a huge moment for me and my family.”

Heffernan has described the season that followed, 2017-18, as “the most frustrating” he’s ever had but all changed when Andy Friend arrived. Now in his ninth season with Connacht, the Ballina man owes his native province a huge debt, not least, as he puts it, for “just giving me an opportunity when no one else was probably going to”.

“From the get-go it was probably Nigel Carolan,” says Heffernan of the man who gave him his break with the Connacht academy after one cap for the Irish under-20s.

“And the whole coaching staff, since Friendy came in, he’s been a massive boost for me individually. He’s done a lot of work off the pitch building up my confidence a bit after probably a poor season before he got in there. The likes of Jimmy [Duffy] he’s been there a long time, everyone in the organisation has been massive for me, and helped me to get here. I owe them a lot.”

Time was when Connacht players may have felt they had to perform 20 per cent better than their counterparts in the other provinces to gain recognition, but Heffernan – one of three Connacht forwards in the tight five in last Saturday’s strong final quarter – does not believe that’s the case anymore.

“Maybe that was the case in the past but Faz [Andy Farrell] has been really good, you see the amount of guys from Connacht in the squad. Individually everyone thinks they need to prove themselves all the time.”

Heffernan’s father, Ivan, was a goalkeeper with Mayo in the mid-70s, winning an All-Ireland under-21 title and two Sigerson Cups. Like his dad, Heffernan also played in the backrow for Ballina, but Gaelic football was his preferred sport until boarding from the age of 15 in Blackrock. Initially on their fifths team, he was a backrow replacement when ’Rock beat Terenure in the 2009 Leinster senior final.

The Lansdowne under-20s were another important staging post before, in his second season in the Connacht academy and at the age of 22, their then backs coach Billy Millard and forwards coach Dan McFarland persuaded him to try hooker. It was a long and frustrating transition, particularly with his throwing, but he learned from Tom McCartney to put the bad throws behind him.

Last Saturday he nailed his three darts, leading to two maul tries, the first of which by Will Connors followed a throw to fellow Ballina man Caelan Doris – surely a first of its type in the history of Test rugby.

“It was great to take the field with Caelan. We would have done a small bit of training together when we split there during the off-season, so it was pretty special to have a real mate of mine. He played for Ballina as well so having two fellahs from Ballina Rugby Club out there was pretty cool, definitely.”

Heffernan provided plenty of energy too, making his tackles and a couple of good carries as well as hitting plenty of rucks, although the “work-ons” he admits to are probably not effecting one clear-out and failing to lift Peter O’Mahony for the game’s final restart after his own try.

A keen reader, Heffernan is currently reading The Great Mental Models by Shane Parrish and Rhiannon Beaubien and listening to The Infinite Game by Simon Sinek. He’s also always found sports psychology interesting, and recently read both The Inner Game of Tennis and The Inner Game of Golf.

“Some of the stuff on close skills I would have read up on before. It’s quite interesting because it’s something I wouldn’t have done before moving into hooker, and the close skills side of things is so different to the normal side of the game.

“You have to prepare a bit differently and I have to switch between playing a rugby match where you’re basically running around trying to kill each other to having to execute a close skill under pressure. Same as skippers I suppose.”