Déjà vu all over again for Munster against Leinster 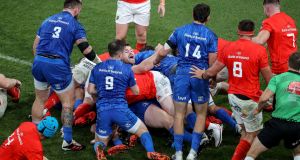 Crowds or no crowds, Leinster and familiarity reigns. The serial trophy hunters stand within a game of a unique third Pro14 title in a row after maintaining their Indian sign over their old foes to beat them for a third semi-final in succession.

Marshalled by Johnny Sexton, as expected, Leinster had the better running game, but they also had the superior tight five, scrum, maul and defence. To compound this, other areas of Munster strength a fortnight ago, namely lineout, in the air and JJ Hanrahan’s kicking, didn’t function nearly as well, which didn’t leave them many places to go.

Their sense of déjà vu must be overpowering after a fifth successive semi-final defeat in both competitions, and fifth in a row against Leinster, the last three in successive seasons. The nature of this knockout tie ensured it didn’t scale the heights of two weeks ago, yet without being anywhere near their best Leinster thus extended their unbeaten run this season to 22, and to 24 overall.

Munster huffed and puffed. They put their bodies on the line, and met Leinster on the gainline at full throttle and on both sides of the ball.

Leinster didn’t start particularly well either, and scarcely threatened Munster in the opening quarter. But Jordam Larmour, utterly vindicating the faith rightly shown in him, along with the composed and lively Hugo Keenan, and James Lowe were good under the high ball, and their defence held firm. In truth, for all the talk of playing with more width, Munster’s running game was quite narrow.

By contrast, Leinster played with more penetration and width from further out, had the better strike plays off set-piece, and although not as clinical in the opposition 22 as normal they still had more.

Amid signs that the Government is receptive to the major sports organizations coming up with proposals for the gradual return of spectators through the turnstiles, it was still a slightly melancholy occasion as the best supported domestic fixture anywhere over the last 15 years was played out in another eerie echo.

Initially, most of the noise came from the men in red - well, more fluorescent orange - and especially their animated bench. A loose pass by Luke McGrath prevented Leinster from establishing an early rhythm and despite a second confident take by Larmour from Conor Murray’s box kicks, McGrath was then penalised for going off his feet as CJ Stander went for a trademark poach. Hanrahan opened the scoring.

Breakdown penalties aplenty again, Sexton was wide from halfway and when Caelan Doris knocked on the restart, there were plenty of yelps from the men in orange. But when Damian de Allende ran at Sexton, helped by Robbie Henshaw the Leinster captain engineered a choke tackle. Cue animation from the men in blue.

Munster generated some tempo, but Larmour dealt with Hanrahan’s grubber and Leinster’s set-piece attack from halfway was altogether more potent, bringing Keenan onto the ball at pace before Sexton long’s diagonal kick was fumbled by Earls.

Cue scrum and maul pressure which, as in the first game, saw Leinster splinter the Munster pack and Kelleher brush the line with the ball amid suspicions of a double movement. Sexton converted. With their first foray, Leinster had eased 7-3 ahead.

Therein, as one felt might be the case, lay the difference - translating pressure into points.

After Peter O’Mahony was trapped at a ruck, Leinster went to the corner and upped the ante. Jack Conan and Cian Healy carried hard, Niall Scannell was pinged for not rolling away, and Sexton closed out the half by making it 10-3.

Soon after the resumption, Munster lost the dangerous (if largely unused) Andrew Conway, whereupon Larmour also departed after a collision when failing to gather Sexton’s wounded duck of a pass. Both sides reshuffled, Munster less efficiently as Hanrahan switched between outhalf and fullback.

As Doris’ strength on the ball grew in influence, Leinster went for the killer blow, but Kelleher fumbled and Fardy came in from the side to release the pressure. Against that, Andrew Brace overturned a likely three-pointer for Munster after a video review showed Daly had taken out Lowe in the air, after an intervention from Sexton.

Again though, Leinster lacked their usual accuracy, as Ryan Baird forced the pass shortly after his introduction. Meantime Munster’s hitherto perfect lineout came undone (as it did four times in all) when Devin Toner plucked Scannell’s throw.

Tadhg Beirne’s strength on the ball, despite a quartet of attempted clean outs, earned a penalty, but Hanahan was wide from 45 metres. Even so, an attacking Leinster scrum was reversed when Porter shouldered Murray off the ball, and this was compounded by Brace penalising Sexton for not rolling away, even though Rory Scannell dived off his feet to pin him down. Again though, Hanrahan missed.

By contrast, after Sexton released Baird for a big gallop along the touchline, Doris’ strength in the jackal earned Leinster a penalty which Sexton duly nailed to end the stalest of third quarter stalemates.

Josh van der Flier, to his acute embarrassment, was sin-binned within a minute of his arrival for not releasing after the tackle. Munster’s pack, actually their team, threatened to maul over the Leinster line but in breaking off, a handful left the ball behind, before it then slipped through John Ryan’s hands.

Ultimately, they hadn’t troubled the scoreboard after the fifth minute.