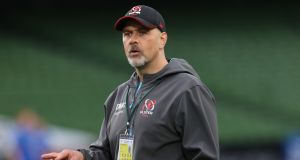 Ulster coach Dan McFarland: ”I have a love of the contact, of collective speed, that the system lasts longer at a persistent speed than the opposition.” Photograph: Billy Stickland/Inpho

There are several ways to interpret Ulster’s awful restart. They appear to be mired in pre-season mode. At least the halfbacks cannot mess up the fundamentals - catching, kicking, passing - any more than they already have done.

Perhaps the opening defeats to Connacht and Leinster are all part of Dan McFarland’s guerrilla tactics that will see them spring to life come the knockout matches. For one year only, September and October are the trophy months, and maybe Ulster are timing their run to perfection.

Or we can deal in reality. One of the four provinces was bound to forget how to win after six months of silent contemplation and muscular development. Whatever the root cause of Ulster’s shaky return, they must dramatically improve to feature in five more games during the 2019/20 season. Otherwise, these trips to Edinburgh and Toulouse will rub them out of Pro 14 and Champions Cup contention.

McFarland was disgusted with the performance against Connacht, and it was refreshing to hear him say as much on live television, but defeat to Leinster ‘A’ last Saturday forces him to take hard look at certain individuals.

The 48-year-old Englishman wants to “squeeze every drop out of everybody’s potential” and while this is an important mantra when facing adversity, eventually progress will come down to the quality of player at his disposal.

McFarland is a rookie head coach in his second season at a professional club that found itself in all sorts of trouble - mostly off-field - as recently as 2018. We are equally looking at the evolution of a leader with 14 years of experience putting teams from Galway to Glasgow through their paces, while armed with a degree in psychology and an fascination with the great NFL coaches.

All those coaches with Superbowl rings, from Lombardi to Belichick, will nod towards their quarterbacks. Be it Packers (McFarland’s favourite team) legend Brett Favre or the evergreen husband of Gisele Bündchen, you live and die upon how the team gets built around the playmaker.

McFarland and Ulster have settled upon John Cooney to fill the role of a French-style goal-kicking scrumhalf. He is central figure in everything they attempt to do. Last Saturday’s comedy of errors can be wiped clear at Murrayfield by the 30-year-old Dubliner rediscovering his mojo.

Brave defeats in today’s Pro 14 semi-final and the Champions Cup quarter-final in France will keep the wolves from the door - not that anyone in Belfast or Lansdowne Road is putting McFarland under pressure - but a solitary victory over Richard Cockerill’s tough yet very beatable Edinburgh or something special at Le Stadium on September 20th will allow Ulster to file away this unique season in the success cabinet.

Ulster and McFarland have earned more time to keep developing but there are obvious pieces missing from the puzzle. The 10 jersey is still open. Billy Burns has the opportunity to slam that door shut this month. Centre looks weak when held up against the other provinces while Ian Madigan or Alby Mathewson have a small window to show the value they are supposed to be adding to the overall plan.

“My background is working with coaches who like to play at speed,” said McFarland last year in direct reference to Gregor Townsend and Pat Lam. “I have a love of the contact, of collective speed, that the system lasts longer at a persistent speed than the opposition. For that you need to be physically tough and robust. That’s something that we’re working hard on here.”

Unlike Leinster’s ability to play a certain way regardless of personnel, Ulster without Iain Henderson, Will Addison, Jordi Murphy, Jacob Stockdale and Stuart McCloskey lack the weapons needed to capture any silverware in 2020, or 2021 for that matter.

Beating Edinburgh is their ceiling until their second string talent starts delivering to an international standard. The aim of every player wearing a provincial jersey must be to break into Andy Farrell’s squad. If they are not in the conversation their value needs to be re-examined.

In theory, Ulster do have contenders for Ireland selection in every position. Take Jack McGrath. In 2017 he was second only to Mako Vunipola when it came to scrumming down for the Lions against New Zealand. Injury slowed his march but at 30, McGrath either enters an Indian summer comparable to Cian Healy or he will be shoved further down the pecking order behind Dave Kilcoyne and a growing host of looseheads.

Rob Herring is doing his job at set piece so competently that Leinster’s Rónan Kelleher will have to accelerate his development before the young hooker can monopolise the test slot.

In 2015 Marty Moore was sitting pretty behind Mike Ross as Ireland’s reserve tighthead prop. He has two Six Nations medals to prove it. Tadhg Furlong, Andrew Porter and plenty of young tightheads mushroomed around the provinces as Moore struggled to make an impression in the Premiership with Wasps. He needs to improve his conditioning or be left behind when Gareth Milasinovich, the 27-year-old South African who has recovered from ACL surgery, gets up a head of steam. The readymade alternative is Tom O’Toole, who has already muscled past Moore and into Farrell’s training panel.

Locking stocks should represent an area of Ulster strength. Hopefully Henderson will make a full recover from hip surgery to lead them into 2021, and reclaim his Ireland jersey alongside James Ryan before Ryan Baird usurps him.

In the meantime, Kieran Treadwell needs to fill that gap. The Londoner was exposed to international rugby a week before Joe Schmidt ignited the Ryan era on the tour of Japan in June 2017. That Treadwell has only added a few minutes against Fiji in 2018 versus Ryan’s stratospheric rise gives an accurate report on either man’s development. If the 24-year-old’s six foot seven inch frame cannot dominate, the O’Connor brothers from Skerries and Sam Carter, capped 16 times by the Wallabies, can allay any concerns McFarland has in this department.

Backrow looks healthy so long as Murphy shakes off a concussion. The 29-year-old made the right call to move north as it took him out of the current five-way scrap in Leinster to play openside. Marcell Coetzee is one of the best poachers in the world - injury blocked a Springbok recall last year - while Ulster simply cannot do without his ball carrying.

Nick Timoney and Sean Reidy are gridlocked by backrow options elsewhere, they are somewhere behind Jack O’Donoghue and Will Connors, but no coach would turn their nose up at their physicality and on-field intelligence.

McFarland can be quietly content if Murphy et al are overlooked by Farrell this winter.

Scrumhalf is the key position. Cooney’s bloodhound senses when hunting tries and goal kicking percentages are the primary reason for Ulster’s steady turnaround. But Mathewson, even at 34 and 10 years since his last All Blacks appearance, is an essential signing if Ulster are to finish games at the tempo that any student of Gregor Townsend will demand.

Burns is the outhalf for the foreseeable future with Madigan or Bill Johnston tasked with establishing themselves as reliable end of game contributors. The alternative is to tap up one of Leinster’s four outhalves as Harry Byrne and Ciarán Frawley keep providing glimpses of excellence on severely limited minutes.

Midfield is a short-term problem with genuine promise in the long-term. Stuart McCloskey and his neat offloading game is the launch pad for most attacks but the emphasis is on James Hume to fill a sizeable gap in quality between Ulster and the other provinces. They could do with Stewart Moore (21) and Hayden Hyde (20 this month) bringing classy displays for the Ireland under-20s into the senior ranks as soon as possible.

Gordon D’Arcy said it best about the Ulster fullback at the Aviva stadium last Saturday. The mantle was been passed. Jacob Stockdale is a world class left winger who looked every inch the natural successor to Rob Kearney with his siege gun boot, decent positional sense and aerial dominance before limping ashore.

Robert Baloucoune’s injury seriously lightens their attacking options in the back field.

That’s McFarland’s major problem. His best team can match anything Edinburgh, Leinster or Toulouse throw at them. Take four or five heads out of the picture and they become an average side at best.

Ulster have the right coaches in place and talent in key positions. Once McFarland fills the glaring holes in the squad with some clever recruitment, despite a disappearing budget, stable progress seems guaranteed.

If they extend their season from two to three more matches it can be chalked up as an example of how to make do with what you have. That would be no small achievement by any standard.