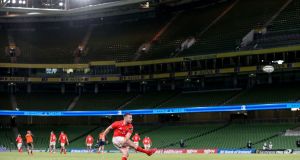 Empty stands at the Aviva Stadium form the strange background as Munster’s JJ Hanrahan takes a kick at goal during the recent Pro14 clash against Leinster. Photograph: Dan Sheridan/Inpho

It’s great to have rugby back, better still that Leinster and Munster have set up a third semi-final in successive years.

The players of both teams will again defy the lack of atmosphere due to the match taking place behind closed doors, just as they did to striking effect two weeks ago. But of all the games in the world none will be hit harder by the absence of fans. Like no other derby in the game, Leinster-Munster matches command that they go full tilt in front of full houses.

It wasn’t always thus. For the first ten years of professionalism, the IRFU and Irish rugby didn’t realise the golden goose they had in their own back yard. Despite the success of the inaugural 2001-02 Celtic League final at Lansdowne Road the two sides didn’t even meet in the 2002-03 season, when they were drawn in separate pools of the Celtic League.

But ever since the RDS was packed to the rafters with 14,135 supporters for the 2005 New Year’s Eve meeting in the Celtic League – when Felipe Contepomi celebrated his second try in a 25-point haul by almost jumping into the crowd – all changed, changed utterly.

With the sides meeting again in the semi-finals of the Heineken Cup at Lansdowne Road the following April, that sparked 14 capacity crowds in a row and it’s been pretty much like that ever since.

The then record 82,208 for the 2009 semi-final at Croke Park may be seen as the rivalry’s zenith, but despite the regularity of three meetings per season, the fixture’s appeal has even had an upturn in recent times.

All told, in the ensuing 34 matches prior to the resumption after lockdown, the total attendances have amounted to over 1 million. The precise number, according to official figures, is 1,056,261, which works out an average of 31,066 per game.

The loss financially to Leinster primarily, but also the IRFU, Saracens, Munster and both the organisers of the Pro14 and the EPCR from having these two Leinster-Munster matches and, presuming no spectators are permitted inside the Aviva Stadium on September 19th for the Leinster-Saracens quarter-final in the Heineken Champions Cup, will likely be in excess of €4 million.

True, in normal seasons such as the last two, Leinster would have hosted Munster at the semi-final stage at the RDS, with its near 19,000 capacity.

Even so, it’s a safe presumption that the ‘regular’ season Pro14 meeting between Leinster and Munster would have again drawn a 50,000 capacity crowd to the Aviva Stadium (as it did last season).

Likewise, another semi-final at the RDS would have drawn a capacity attendance, and the quarter-final against Saracens was already a sell-out.

Leinster would normally keep the ‘regular’ season Pro14 gate receipts from their meeting with Munster, generating close on €2 million, which means that after overheads and the rental to the IRFU for hiring the ground, they probably missed out in at least €1.4 million.

As for a sold-out semi-final at the RDS, that would have generated a surplus of around €600,000 in gate receipts, which would have been split three ways between Leinster, Munster and the Pro14.

A quarter-final against Saracens would have yielded over €1.6 million in gate receipts and, under the rules of the Champions Cup, Leinster would have been entitled to 65 per cent of that amount, which they would have shared equally with the IRFU – in excess of €500,000 each. With a full house, Saracens’ 35 per cent take would have been around €550,000.

With minimal charges now applying for the hiring of the Aviva Stadium, the IRFU have also missed out on that source of income for the Leinster-Munster and Leinster-Saracens games, and that is reckoned to be in the region of €300,000 per game.

So, while it’s all well and good having some real, live rugby back on television, thus bringing in TV and sponsorship revenue, aside from the reduced spectacle that comes with empty backgrounds and recorded soundtracks through pa systems, the sport is still taking a huge financial hit on a weekly basis.

The manner in which sport was brought to a shuddering halt by the coronavirus pandemic and its gradual return behind closed doors has undoubtedly exposed how much Irish rugby, like others, is overly dependent upon spectators going through the turnstiles, to the tune of 50 per cent-plus of their annual income.

Even so, the UK government are permitting, on a trial basis, the return of spectators on a strictly limited basis. For example, this weekend Harlequins are employing a pilot scheme which will permit an attendance of 4,000 for their Premiership game against Bath tomorrow. The RFU, pending government approval, are also looking to fill a quarter of Twickenham’s capacity (22,000) for their end-of-year home internationals.

The IRFU, akin to the GAA and FAI, have lobbied the Irish Government with proposals to bring back attendances, be it based on one or two metre social distancing, or 25 per cent of a stadium’s capacity.

With schools having reopened, the sporting organisations are pressing their acute need to begin piloting similar schemes for the phased and limited return of spectators to their fixtures.

The coronavirus is not going to go away any time soon but professional sports such as rugby may go away if they aren’t able to let people come through the turnstiles.