McFarland and Ulster approaching Connacht clash as ‘a win-and-in’ 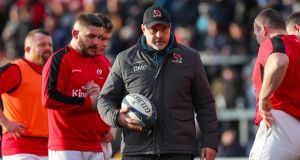 Ulster head coach Dan McFarland says his side are taking nothing for granted against Connacht as they look to qualify for the Pro 14 semi-finals. Photograph: Ryan Byrne/Inpho

The clock has finally ticked down to this weekend’s return of Pro14 rugby when nearly six months since their last games, Connacht take on Ulster in the Aviva Stadium on Sunday (4.30pm).

Dan McFarland’s Ulster has the bigger carrot as they require just two points from these two interprovincials to qualify for the semi-finals, and McFarland wants his side to get the job done on Sunday.

However, Andy Friend’s Connacht has other inducements. While qualification is “mathematically possible”, but unlikely, Friend wants to show the other provinces that his new-look squad, deemed, he says, a “bunch of misfits” by others, is really competitive, with much to prove.

There is over-riding relief for both sides to be returning to competitive rugby. Yet these end-of-season fixtures, still have the feel of a pre-season with much-changed squads – most notably in Connacht.

Friend has recruited some 14 players in the Covid-closed season, two of whom, wings Alex Wootton and Peter Sullivan – one of six promoted from the academy – will start tomorrow. In comparison there has been little change in Ulster, but McFarland has strengthened his halfback options with former All Black scrumhalf Alby Mathewson and Ireland outhalf Ian Madigan from Bristol Bears, both named on the bench.

McFarland says his side, currently in second place in the Pro 14’s Conference A, with a nine-point advantage over third-placed Glasgow, is in a “decent position”, with both Pro 14 and European hopes still alive.

“We still need a minimum of two points from two away games – Connacht and Leinster – and these are going to be really big fully-loaded interprovincial derbies, so nothing is being taken for granted and we approach the Connacht game as a win-and-in,” McFarland says.

“It has not been possible to get up to proper match fitness in the shortest period of times, but we hope to be as close to that level without pre-season games. We haven’t changed many players, so a lot of what we are doing now is building on what we did before.”

The last occasion the two sides met was when Ulster dished out a 35-5 defeat to the Connacht visitors in Ravenhill – a response to the previous season’s loss when Connacht’s 22-15 win finally broke 58 years of misery. Although missing the influential Robert Baloucoune, Sean Reidy, and Iain Henderson, McFarland has named 10 players from that St Stephen’s Day victory for Sunday’s clash, including six in the pack.

Connacht’s John Porch, who is named at fullback in the absence of Tiernan O’Halloran and the injured Stephen Fitzgerald, is the only back who featured against Ulster earlier in the season. But it is Bundee Aki, who “with additional weight, will be a hard man to stop” who is expected to play a key role for Connacht tomorrow.

While this counts as a home match for Connacht, the playing field is levelled in an empty Aviva. Add in new playing laws, and which team adapts better, Ulster’s greater incentive and Connacht’s renewed energy, this game is a much-anticipated restart to the season.