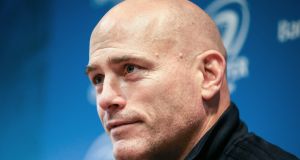 Felipe Contepomi: “We know historically how they [Munster] play and what it takes to go there and get a result.” Photograph: Gary Carr/Inpho

Felipe Contepomi appreciates better than most the intense rivalry between Leinster and Munster.

During his six years in the blue jersey he placed himself at the epicentre of the primal clashes, gracing that particular provincial derby on 10 occasions in both league and European matches.

He has known both the pain of defeat and the joy of victory and understands how games are framed in the minds of the respective supporters. As backs’ coach he will help to prepare Leinster for their trip to Thomond Park on Saturday night (6.0) and will be able to inform those young players who have yet to experience the rivalry.

Contepomi argued that it doesn’t matter what personnel are in involved on both sides at the weekend, it won’t dilute or diminish the desire to win the game.

“It is great. As a rugby player it is one of those atmospheres that’s great to play in. I have been in some other big derbies, like Stade-Racing, and I don’t know if they are the same.”

The Argentine pointed to the fact that Saturday comes towards the tail-end of a 13-game, block of matches that has incorporated both the Guinness Pro14 and Heineken Champions Cup. Leinster are unbeaten so far this season but that statistic will be challenged rigorously in Limerick.

The Irish player management welfare programme will have a sizeable impact on the composition of the two teams but respective head coaches Leo Cullen and Johann van Graan will be able to further evaluate their squad depth in a ferociously competitive environment.

Contepomi said: “It is when you start to see how the real squad functions. Everyone is working hard and some guys will have their chances against Munster, some had it against Ulster and some will have it against Connacht.”

Asked to assess the impact Stephen Larkham’s arrival has had on Munster’s attacking shape, he instead took a more holistic view.

“We always scout the opposition but to start with we try to get better with what we want to do and we have some things to improve on, especially from last weekend. We focus first on us and then you see, yeah, Munster have new coaches in Stephen [Larkham] and [Graham] Rowntree.

“He [Larkham] has added a few things but Munster by themselves have traditionally been very strong anyway so it is not like this is someone who came and suddenly they have a new team. We know historically how they play and what it takes to go there and get a result.

“We have the experience of last year in Thomond so we are expecting a very big challenge. There are a few traits that Munster do and they have been adding others this year. It is good to see them playing really good rugby.”

He responded to the suggestion that Joey Carbery (ankle) might be involved on Saturday.

“Joey Carbery is a great footballer. Whatever team he plays in would be delighted to have a type of player like him. If he comes in it is good for him. He could definitely be a threat but it is just one more piece of the puzzle. It is not the whole thing.

“Munster won’t change the way they play because of the way Joey does or doesn’t play and we focus on ourselves first and then scout Munster as a team and not just as individual players.”

Speaking of outhalves, Leinster pivot Ross Byrne has recovered from a dead leg he sustained in the victory over the Northampton Saints at the Aviva Stadium and is expected to return to full-time training this week.

His younger brother Harry started and impressed in Leinster’s victory over Ulster but Ciaran Frawley might get the number 10 jersey this week as Leo Cullen rotates his squad through the three interprovincial matches in the Pro14 over the Christmas and New Year. The Skerries native could also play inside centre.

Josh van der Flier picked up a head injury when coming on as a replacement against Ulster and didn’t return to the pitch. He is following the return to play protocols.

Secondrow Ross Molony has recovered from a foot injury while Joe Tomane [hamstring] will look to increase his training load this week. Tommy O’Brien passed his head injury assessment (HIA) during the Ulster match and last weekend’s debutant is available for selection.

1 Georgia and Fiji in line to join Six Nations sides in eight-team tournament
2 Peter Byrne: A gruff exterior hid the sensitive soul and warmth of Jack Charlton
3 Frank Lampard says Chelsea players are too quiet on the pitch
4 Obafemi has final say as Southampton stall Man United’s run of wins
5 The Offload: All eyes on Leinster’s academy intake
Real news has value SUBSCRIBE