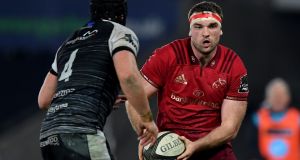 Tadhg Beirne: “It was all a bit of a mad dash and a bit frantic. I even forgot my scrum cap!”

Tadhg Beirne is targeting a Six Nations bow with Ireland after he made his return from injury with a sensational man-of-the-match performance in Munster’s victory over the Ospreys.

The 27-year-old sat out the first two rounds of the Six Nations for Joe Schmidt’s side after suffering a knee problem in Champions Cup action against Exeter on January 19th.

Now back fit, Beirne trained with Ireland this week but wasn’t deemed ready to be involved in Sunday’s meeting with Italy in Rome. He was released back to Munster and was a late call-up for his side’s trip to Swansea after Jean Kleyn pulled out with illness.

Despite his lack of recent action, the former Scarlets star was outstanding as he dominated the breakdown and stole a crucial late lineout. Beirne is hopeful his performance will be enough to force Schmidt’s hand for the final two rounds of the Six Nations.

“I’m always looking to push for an Ireland place,” he said. “I was a bit disappointed not to be involved against Italy this weekend. I knew it would have been a big ask to be thrown straight in, but I got the opportunity with Munster and hopefully I’ve put my hand up and Joe might consider me moving forwards.

“Joe said I hadn’t played and that Ultan Dillane and Quinn Roux have been going really well. Iain Henderson has come back and had some game time with Ulster too.

“That’s just the way it is. I think Joe was on the flight over to Rome during the game, but hopefully he’ll watch it back!”

Beirne has four caps with Ireland to his name after joining Munster from the Scarlets for the start of this season. And he wants to be involved in Ireland’s last two Six Nations games with France and Wales. “Of course the knee injury was frustrating. It didn’t come at a good time, but injuries never do,” he added. “There have been a few other injuries in the second row with Ireland, so there could have potentially been a good opportunity for me, but it wasn’t to be.

“It’s just been a case of me getting my head down and hopefully I will get an opportunity with Ireland in the next few weeks. I got a call on Thursday at 8am and I met the rest of the Munster guys in Swansea. I had to go back to Carton House and grab all my stuff very quickly. It was all a bit of a mad dash and a bit frantic. I even forgot my scrum cap!”

A penalty try and a touchdown apiece from Darren Sweetnam and Mike Haley plus two points from the boot of JJ Hanrahan saw Munster over the line against the Ospreys.

All the hosts could muster was a try from Hanno Dirksen and six points from Luke Price.

Victory solidified Munster’s position at the top of Conference A of the Guinness Pro14 and head coach Johann van Graan was satisfied with the result.

He said: “We’ve won five of the last seven now and it’s so tough to win in Wales and away in the PRO14. We’ll take the four points.

“There is always room for a lot of improvement. This was by no means a great performance from our side, but any away win is good and it doesn’t look like we’ve got any big injuries.

On Beirne’s display, Van Graan added: “It’s incredible to have Tadhg at our club. He was injured for a few weeks, he hasn’t played since Exeter, and he didn’t even train with us this week.

“He only had the walk through and he came in and delivered that performance. It wasn’t perfect as he lost one or two balls in contact, but he’s a player for the big moments and his lineout steal right at the end was massive. For him to come back and play 80 minutes was remarkable.

“Joe will make his decisions over who he will release and who he won’t after the Italy game. We will just wait and see and get an update when we can.

“Ireland play on Sunday and we don’t play until Saturday, so thankfully there is a bit of time this week. It would be great to have him, but if he was picked by Ireland that would be fantastic for Tadhg.”